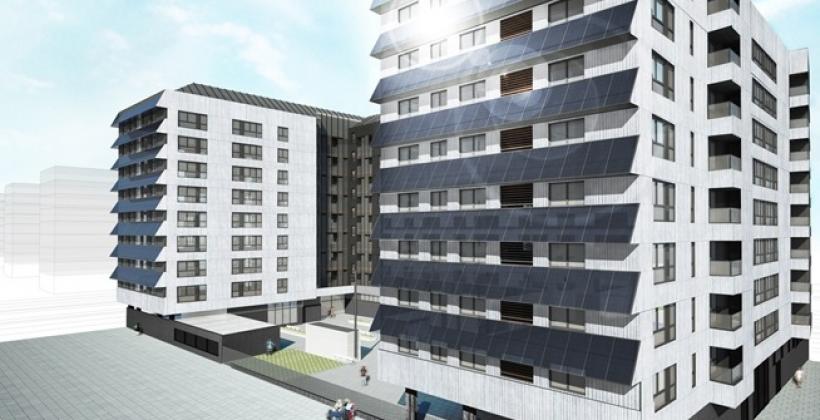 Vitoria-Gasteiz is the capital city of the province of Álava and of the autonomous community of the Basque Country in northern Spain with a population of 235,665 people. It will be the European Green Capital in 2012.

The main focus of the community is to avoid the need of cooling during the summer and reduce the need of energy for heating in winter. Solar technology and advanced energy distribution will be used to reach the goals of the Concerto 3 programme.

Focus of the CONCERTO activities in the Salburua area is the construction of new buildings. Altogether 42,000 m² in 432 energy-efficient dwellings had been planned, split into two sectors . The first is called “promotion A-31” and comprises two identical groups of three residential buildings each. The total heated area of the 256 dwellings is 22,339 m². Each group will be supplied by the heating energy of a 218 kWth ground source heat pump, 173 m² solar thermal collectors, 27 kWth cogeneration units (CHP) and two high performance boilers with a peak power of 774 kW. Surplus energy from the collectors is stored in a seasonal storage.  As the dwellings of A-31 were designed for selling to private people, but there is no demand from the market right now, this task has been delayed. Probably demonstration activities on refurbishment will be performed instead.

The second sector is named “promotion A-32” and represents a building with 176 rented social dwellings (12,549 m² total heated area). The heating energy is supplied by two high performance boilers (peak power of 840 kW)  and a natural gas CHP unit  (25 kWtherm and 11 kWel). Photovoltaic panels with a total power of 60 kWpeak and a total surface of 430 m² are installed as sunshields above the windows (Picture 1). A wind turbine of 50 kW is planned, but not realized yet. The construction of A-32 started in September 2011 and will be finished by the end of 2013 (Picture 2). One remarkable improvement compared to the original plans is the increased insulation quality of the implemented windows (U-Value of 1.1 W/m2K compared to the benchmark of maximum 2.0 W/m²K).

As the energy system at Salburua will consist of a mixture of renewable and non-renewable energy supply sources and an integrated system for distribution and delivery of heat and electricity to the end-users (micro-grid), an energy management system will be installed for optimal operation (Picture 3). Specification, definition, development and validation of the load forecast module, electrical and thermal consumptions have been performed and validation tests are being carried out. The energy system can be summarized as the following:

During 2011 and 2012, TECNALIA – partner in the consortium of the PIME’s CONCERTO project - has specified, defined, developed and validated a module for the economic dispatch of microCHP units, which will be part of the energy management system at Vitoria-Gasteiz. A pilot of this module has been implemented and tested in TECNALIA’s so-called “KUBIK” building (Picture 4). The CHP system used is a “Dachs SE G5.5” with 12.5 kWtherm and 5.5 kWel (Table 1).

Testing was performed in three phases: examining the optimal operation, applying the planned operation to “KUBIK” and collecting and validating the real data. Figure 1 shows the set-up of the test system.

Vitoria-Gasteiz community is a promotion of subsidized dwellings whose design will take into account criteria of energy efficiency, harnessing of renewable energy and sustainability and continuity over time, making people feel proud and encouraging them to participate in the improvement of the quality of life and reduction of the environmental impact.

It is to be built close to the Green Ring that surrounds the city. The total built surface will be of 43,419 m², with a total of 432 dwellings - where around 1,300 residents are expected to live. Five buildings are to be erected in the two nearby areas. In principle, the housing will be owned by the State, and rented to the residents.