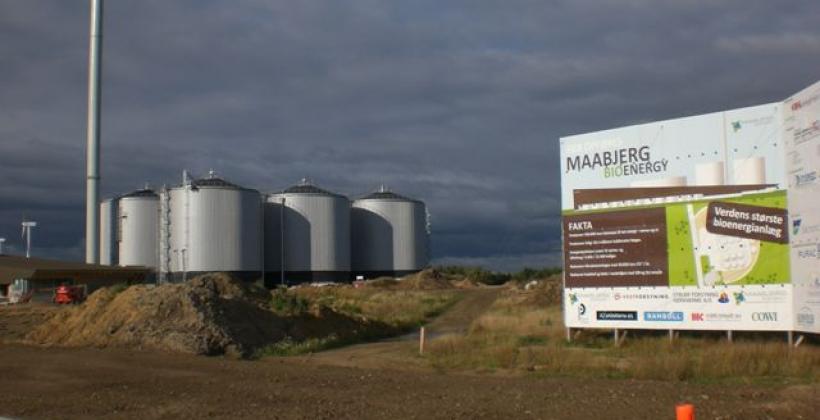 Måbjerg is situated in the Region Midtjylland in the western part of Denmark near the city of Holstebro. Agriculture and food industries are important parts of the local economy – as it is for Denmark  in general.

The agricultural sector is facing increasing problems meeting the environmental regulations – especially regarding the emissions of Nitrogen which seeps into the fields where the manure from the animal production is spread.

A group of local farmers initiated the development of a biogas plant – primarily to reduce the Nitrogen emissions and to protect the sensitive regional water environment from eutrophication caused by the manure. While the manure and other waste from the food industry is digested and reduced to less problematic substances biogas, primarily Methane is produced, which is then used for the production of heat and electricity. The by-products from the biogas production are used as fertilizer on the farmer’s fields and as fuel for further energy production.

At Maabjerg one of the largest biogas plants (Picture 1) in the world has been installed, which is able of handling 560,000 tons of biomass and producing 18.4 million cubic meters of biogas annually. Manure and animal slurry from the supplying farms are pumped to the “Maabjerg BioEnergy plant” by a new pipeline network, thus avoiding almost all transport on the road by trucks and tractors. Additionally other organic waste from the food industry is sent to the plant by road transport (Map 1).

The generated biogas and the dry fiber are sold to the neighboring CHP plant “Maabjergværket” to generate heat and power from it. The digested material will be sent back to the farms where it can be used as a crop fertilizer with reduced nitrogenous impact to the land and water.

Energy saving measures are implemented at the farm buildings (both living houses and staples) owned by the suppliers of the liquid manure. Remote energy measuring meters have been installed at about 40 farms owned by 27 farmers. The assessment is ongoing right now.

Also look at the video about the biogas-plant of Måbjerg - click here.

The biogas plant in Maabjerg currently is the largest in the world, with a capacity of handling 560,000 tons of biomass annually and producing 18.4 million cubic meters of biogas leading to a yearly reduction of CO2 emissions by 50,000 tonnes (Picture 2). The produced heat covers the heating demand of about 5,000 households and the produced electricity accounts to the demand of about 12,000 households.

Additionally nitrogen output in agriculture is reduced by 109 tons/year and phospor by 311 tons/year. Table 1 shows the main financial figures of the plant. The total economic yield according to an operation time of 20 years will be 134 million Euros. The BioEnergy plant saves 300 jobs (agriculture and food industry) in the region of Maabjerg.

Table 1 – Investments Costs according to www.maabjerg-bioenergy.dk

Måbjerg BioEnergy is a bioenergy plant of unprecedented dimensions. It results in reduced pollutions from domestic animal production - this enables increased meat production in Måbjerg. In fact, Måbjerg BioEnergy (MBE) started as an environmental project, predominantly designed to limit the leaching of nitrogen and phosphates into of nutrients to water courses and fjords. A second goal was to help maintain jobs in the farming community and related businesses). The biogas scheme provided an alternative strategy for dealing with manure and hence offered an option for increasing livestock and consequently income for farmers. Furthermore, the project was created to utilize the biomass resources to support the community's energy balance and improve the climate. Annually 650,000 tons of biomass is transformed into energy (heat and power). Måbjerg BioEnergy has two socio-economic upsides: Energy production reduces cost and the farming community is able to maintain current production level while polluting less. Over 20 years the socioeconomic benefit is estimated at DKK 1 billion.

Workshops for farmers on energy management were held.

The Danish CONCERTO community of Måbjerg faced significant regulatory problems with the Danish Waste tax during the creation of the Måbjerg BioEnergy Plant concept. This tax was introduced in 1985 to reduce the quantity of waste diverted to landfill and incineration in Denmark and increase recycling. As in the BioEnergy Plant, incineration of fiber fraction is included, farmers had to choose between reducing the amount of animal waste or paying the tax. The project was hampered by Unclear national and European framework and administrative barriers at national and EU level for the after treatment of the digested manure or insufficient financial incentives for the implementation of the project. Furthermore, a comprehensive process for obtaining all necessary permissions from authorities was the main difficulties encountered by Måbjerg. Administrative barriers caused from unclear national and European framework legislation due to tax issues regarding combustion of fibred fragment from manure and electricity tariffs.

Time consuming cooperative organization posed a barrrier: Despite overcoming issues with legislation, Måbjerg is still fighting with local authority procedures. Farmers should apply to local authorities for environmental approval of any changes on the farm, including establishment of tanks for storing of the raw materials (organic waste). The process of authorisation by the local authority is time consuming.

Delays happened due to the harsh winter 2010/2011. However, they have been recovered later.;

In Denmark there were no feed-in tariffs for the production of electricity from renewable energy sources at the time of the Måbjerg CONCERTO project development. The implementation of Måbjerg BioEnergy has relied on a governmental decision on tariffs for selling biogas and biogas generated electricity. Negotiations with the Danish Government gave a positive result. In February 2008 the Danish Government and the Parliament entered into force a new Energy Political Agreement which gives new incentives regarding biogas. The Government guarantees a 60% regulation of this new, inflation linked, tariff.

Some people worried about the plant and its possible effects on the local environment. (e.g. bad odours).

Implementation of an efficient monitoring system proved to be important - it can still be improved further with the help of the scientific council. Manure transport by pipelines reduces odor, reduces truck movements; furthermore a boiler which can incinerate the fiber fraction of digested manure (reduces the amount of nitrogen and phosphor).

The Government provided a new energy policy instrument regarding biogas. This political decision on tariffs for selling biogas and biogas which generates electricity has been indispensable, providing vital support and influencing the implementation of the CONCERTO project in general and the Måbjerg BioEnergy plant in particular.

The project is so successful, despite all the barriers and delays encountered, because the right stakeholders were actively involved throughout the project’s lifecycle.

Funding Schemes combined CONCERTO + Premium and a fixed feed-in tariff for selling biogas generated electricity. This is sold to the grid with the feed-in tariff (this has been10 EUR cent – increased to 1.15 cent for all biogas plants) decision by parliament, delays were due to low subsidies, as it looked financially unattractive (not feasible).

The municipal utility was involved. In order to strengthen the organization behind the Måbjerg BioEnergy Plant, a newly formed company, Måbjerg BioEnergy Drift A/S (MBE Drift A/S), was established in 2009. This company is owned by Vestforsyning Varme A/S and Struerforsyning Varme A/S (these are local utilities in which the municipality is a stakeholder). MBE Drift A/S has entered into agreements on the purchase of manure and return of the wet fraction with farmers, organized in Måbjerg BioEnergy Suppliers. Måbjerg BioEnergy is basically constructed as a (central) heating supply project with a "neutral" financial goal which means that any profit or loss will affect the consumer price directly. This principle has made it possible for us to obtain a public backing of the funding which made it possible to raise money at very low interest.

In the coming months the Måbjerg-team will continue to work with the connections that were made at Nordic Biogas Conference, and continue to pursue the goal of making their knowledge and expertise commercially available to the industry). There are now more and more biogas plants. Energy Drift formed Måbjerg consultant to spread knowledge. Based on Måbjerg, a new project is coming up which tries to upgrade bioethanol to natural gas quality.

Development of special feed in tariffs for bioenergy .

The energy produced - biogas, power and heat - will be sold to local district heating and electricity distribution companies – and to the neighbouring CHP-plant Måbjergværket, which will also use some of the by-products as fuel. 450,000 tons of biomass will be processed and in total 117,400 MWh of energy will be produced annually causing a reduction of CO2 emissions by 20,000 tons. Additionally, the greenhouse gas emissions are reduced as the Methane from the manure is used for combustion rather than simply emitted into the air.

A number of farms which supply the biogas plant with manure are selected for the demonstration of energy efficiency measures implemented in the stables and homes of the farmers. Elements such as heating, lighting, ventilation, insulation etc. are all considered and a programme is established to monitor the development in energy consumption.