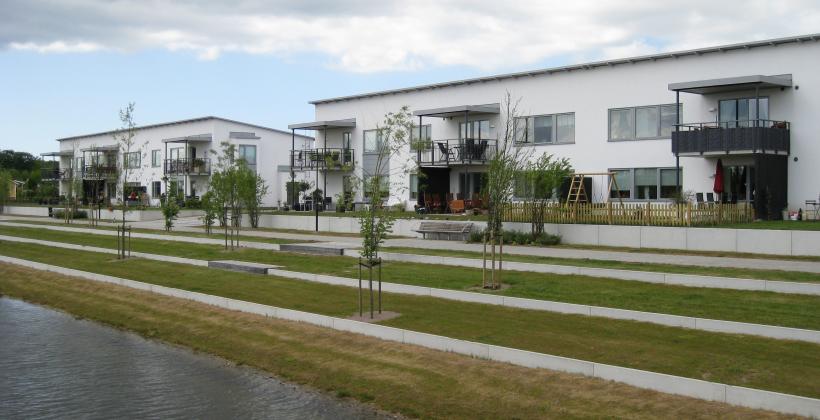 The cities of Helsingborg with 97,122 inhabitants and Helsingør with a population of 46,279 are separated by a mere 4 km stretch of water and a 20 minute ferry ride. Cooperations between the two cities are extensive in many fields.

The municipality of Helsingborg wants to reduce total energy consumption per inhabitant by four percent by 2010 compared to 1990, while reducing fossil fuel input to the district heating and power system by 20% in the same period.  In Helsingør, the aim is for a 30% reduction compared with present standards in the gross energy consumption for heating, hot water, lighting, ventilation and cooling in new eco-houses.

At this CONCERTO site 598 new eco-dwellings (74,820 m²) with a saving of 25-35% in energy demand have been constructed. Highlights among the performed measures are demand-controlled ventilation, intelligent control systems, individual metering (Picture 1) and evacuated tube collectors integrated into the façade.
About 584 dwellings (64,380 m²) have been eco-rehabilitated stepwise towards high energy-efficiency (including 33,923 m² of office, school and cultural institutions). Low carbon technologies like demand controlled ventilation, ventilation with heat recovery and heat pumps have been applied. In total 228 m² of solar thermal collectors for domestic hot water preparation have been implemented.
With the Grydemose School a public building of 11,196 m² has been retrofitted (Picture 2). Beside energy efficiency measures at the building’s envelope and facilities a photovoltaic system of 148 m² (22.5 kWpeak) has been installed. Two further medium-sized PV plants (total 134 m²) have been constructed at the Public Swimming Bath and Kulturværftet in 2011. Kulturværftet (Picture 3), a public cultural building, became the first CO2 neutral concert hall in the world and gained a large media response.
A biogas plant installed at Helsingborg (Picture 4) and a large heating plant (based on wood chips) built at Helsingor are described in the “More Detailed” section.

Biogas Plant Helsingborg
At Helsingborg a large biogas plant (mesophylic process) has been constructed and commissioned in 2007 (Picture 5). It has an input design capacity of 80,000 tons of organic waste per year and an calculated output of 45 GWh gas per year. In 2008 gas with the energy content of 35 GWh and in 2009 of 41 GWh has been produced. The following are used as feeding material for the plant:

Diagram 1 – Inputs and outputs of the biogas plant in 2010

Biogas Boiler at Helsingor
This 5.5 MW woodchip boiler (Picture 1) has been commissioned in 2009 and had a total investment of 4.96 million Euros. Every day it is fed by 35 to 40 tons of wood chips, the estimated heat production for one year accounts to 35,000 MWh. Picture 2 shows the exhaust smoke washer on the left and the wood chip storage on the right.

Kulturværftet, a public cultural building of 13.000 m² in total, was refurbished until 2010. Parts of this project (like the PV-System) were supported by the CONCERTO initiative. The features, which were applied to reach a maximum energy efficiency, are listed below:

Eco-dwellings for elderly residents in a 14-storey block. 107 eco-dwellings, along with 64 new row houses, and the refurbishment of around 250 apartments in blocks, some of which date from the 1960s.

A new standard for energy in refurbishment and new buildings in Helsingborgshem was established.

Partly driven by the ECO-City project and during the project period Helsingborgshem became aware of the great advantages of low energy buildings and Eco refurbishment. Today, several passive house and low energy building neighborhoods have been erected in the ECOCity area of Helsingborg which has improved the life quality of the inhabitants in the social dwellings of Helsingborg. The objective of the janitors’ meeting was to inform local janitors of potential energy saving in public buildings. The meeting increased the awareness of the. Contributions to the energy plan project meant that more activities in that project could have been done. The energy plan project improved the awareness on energy issues in Helsingborg immensely.

Educational meeting with janitors in Helsingør and Helsingborg took place. All involved in the energy plan project (approximately 65 people) increased their knowledge and understanding on energy issues, as well as other local politicians. It has also lifted the energy and climate issues higher on the local agenda.

Many organizations were involved. Key persons changed their work place which made the project slow down. A lot of administration and several detailed questionnaires.

It has been shown that buildings, where the contractor was told that a test (e.g. air tightness testing) would be carried out performed the best. A new metering system had been developed and implemented in selected new buildings of Helsingborgshem. The system increased the awareness of the tenants of their energy consumption and led to energy savings. The energy consumption was clearly visualized on the monitoring screen. Besides energy consumption the metering system also handles comfort metering, burglar alarm, fire alarm etc. which improved the tenant's attention to the monitoring screen. The system proved that with a higher awareness from the consumer, energy savings can be realized.

There was a strong network of local stakeholders through a working group with access to consultants. Tenants management was carried out during retrofitting.

In Helsingborg, the housing association played a determinant role to keep tenants motivated as the refurbishment project took place whilst the homes were occupied. The association paid for alternative accommodation if necessary during prolonged building work.

Another important and effective tool in Helsinborg has been the creation of a strong network with Helsingor. The municipalities worked together on a strategic training event, where stakeholders involved in energy efficiency campaigns created a network and started up defining themes and a work procedure for energy savings campaigns towards end-user in the region

In Helsingborg, the residential refurbishment projects (and also the new buildings) were all owned by one Housing Association (company owned by the municipality). This was a big advantage for the project.

In Helsingborg, an innovative billing procedure was implemented by the municipal housing company to motivate tenants to save energy for space heating. Flats should be rented with a given temperature of 21°C, a lower temperature leads to a discount in the rent, a higher temperature resulted in a rent increase.

ECO City project in Helsingør initiated a significant change in the political agenda of the municipality. During the ECO-City project, the political commitment increased considerably. Side effects of the SE activities have been raised awareness among politicians and increased consciousness about energy and environmental impacts of janitors.

In Denmark gas supply companies, especially multinational ones, oppose biomass heat systems. In Helsingør, for example, they complained that the municipality gave the permission to convert a natural gas supplied area to district heating fed with biomass. This exclusive supply right is slowly being abolished, but the gas companies still fight for their original privilege. In Helsingør, due to a the high workload of the Court and Complaints Board and several other issues, the settlement of the case took more than five years to decide (in favor of biomass). In fact, in Denmark a company is only allowed to construct biomass boilers in gas supplied regions if this is a demonstration plant or the demand for heating has increased, leaving room for additional energy supply (without reducing gas sales). It is also allowed if socio-economic benefits are strong. However, the criteria to determine the benefits include technicalities that take into account the tradeoff between lost sales revenue from gas and benefits deriving from the renewable alternative. These exclusive rights are slowly being abolished. The conclusion is that long term planning is required and it must be understood that such problems may be encountered. It is commonly recommended that such local activities should not start without first obtaining a consensus with companies.

Another important and effective tool in Helsingør has been the creation of a strong network with Helsingborg. The municipalities have worked together on a strategic training event, where stakeholders involved in energy efficiency campaigns created a network and started up defining themes and a work procedure for energy savings campaigns towards end-user in the region.

It is important to have capacity and knowledge within the municipality to be able to require the optimal solutions from developer. External expert support, which in this case was provided by ECO-City was fundamental.

In 2010 it was decided in the city council of Elsinore to use the ESCO model in a Danish version, whereby the investment is financed by loans up-front. The main purpose for the ESCO project was to reduce energy consumption and CO2-emissions from about 70 municipal buildings, including school buildings, libraries and administration buildings within a period of 2-3 years.

In Helsingør, the ECO City project has initiated significant changes within the political agenda of the municipality. During the ECO-City project, political commitment increased considerably and in 2009 Helsingør adopted a climate policy, obliging the municipality to reduce CO2 emissions to less than one ton per inhabitant by 2030 and to become CO2 neutral in 2050.

Within the administration the municipality used the project and inspiration from Helsingborg as an outset to develop and adopt an ambitious climate policy.

Helsingør and Helsingborg aim to establish approximately 598 new eco-dwellings in total 74,820 m² with a saving of 25-35% in the energy consumption. The eco-dwellings are equipped with extra insulation, low energy windows and demand controlled ventilation. About 584 dwellings in total 64,380 m² are eco-rehabilitated stepwise towards high energy efficiency. Further 33,923 m² office, scool and cultural institution is included. The project will set a reference for new standards to prevail in the community both in retrofitting, new buildings, energy supply and use of polygeneration.  Furthermore, the initiative will be anchored in the whole community through training of SME's, janitors corporation and trough extensive dissemination.

Specifically, a 2-9 MW wind turbines, a 5,5 MW biomass boiler using woodchips (first line of 2) and 228 m² solar collectors for domestic hot water supply and several PV plants are among the examples of the increase in RES in this community.  A new type of comfort metering and control system will be introduced and a feasibility study of a potential of geo-thermal exchange and energy storage plant and possible construction will be realised.

In Helsingborg an innovative billing procedure was implemented by the municipal housing company to motivate tenants to save energy for space heating. Flats should be rented with a given temperature of 21°C, a lower temperature leads to a discount in the rent, a higher temperature results in a rent increase.