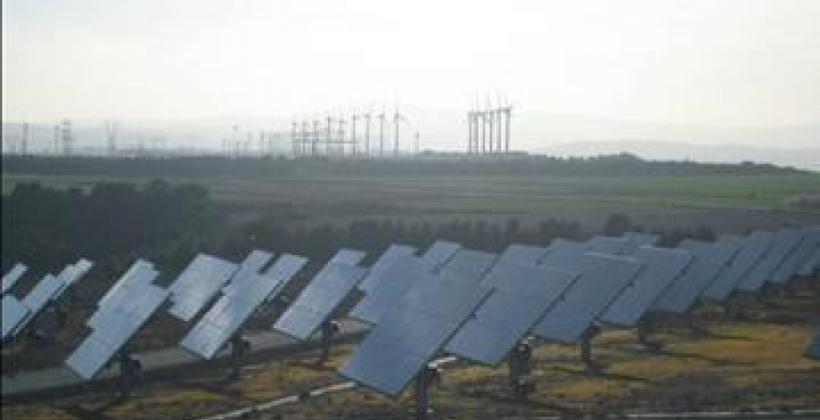 Tudela is a community  with around 35,000 inhabitants to the south of Pamplona in the region of Navarra, Spain. Tudela will put intelligent energy management at the centre of its sustainability plan.  The community of Navarra occupies an important position in the field of renewable energies, and as such, has been since 2001 the official headquarters of the National Centre for Renewable Energies (CENER).  A national training centre for renewable energy is also located in the region. Both of these institutions are lending their  expertise to the community.

Different large new building projects have been realized at the CONCERTO community Tudela. The “Valle Ulzama” project (Picture 1) comprises 46 dwellings in two buildings of 6,276 m² floor area in total. At the “IAS Gestion” two buildings with 36 apartments have been built with a total floor area of 6,173 m² (Picture 2). These two buildings are heated by a system of two biomass boilers each. Each boiler has a peak power of 140 kW and can be fired by pellets or chips of wood or miscanthus. The “Mancomunidad” building is a new public building with 2,088 m² and implements a 15.5 m² solar thermal unit for domestic hot water preparation on its roof (Picture 3+4). At “Delgado Garces” 90 dwellings with a total floor area of 9,431 m² have been retrofitted.  Throughout the city further 56 dwellings in 3 different buildings (dating from the 50ies to the 70ies) with a total floor area of 5,565 m² were retrofitted.

Further renewable energy systems have been installed at the Queiles Neighborhood. A photovoltaic plant of 164 m² total module area produces a peak power of 24 kW electricity (split into two systems). The buildings are heated by six biomass boilers of 62 kW each. In the Lourdes neighborhood the eco-buildings are supplied via a district-heating network, connected to two biomass boilers of 720 kW each. Additionally three photovoltaic plants with 2 x 12 kWpeak (each 79 m²) and 24 kWpeak (157 m²) have been installed. At the CONCERTO area a 100% supply of heat with renewable energy sources at a yearly balance has been reached. For new buildings heat pumps will be taken into consideration as well.

At Paseo de los Poetas 12 y 14 the “IAS Gestion” building complex has been built (Picture 5+6). It consists of two 5-storey buildings with 36 dwellings in total and a total floor area of 6,173 m2. It has a very high insulation level (Table 1) and a calculated demand for space heating of 41.1 kWh/m2a. Concerning the building envelope a focus has also been put on the shading to prevent from unneeded solar irradiation (Picture 7). How these factors influence the overall energy consumption and which values can be achieved, is shown in Figure 1 with the simulated energy demand values.

The heating energy is provided by a system of two biomass boilers for each building (Picture 8). Each boiler has a peak power of 140 kW and can be fired by pellets or chips of wood or miscanthus. The domestic hot water preparation is done by solar thermal collectors, which have been installed on the roof of the building. 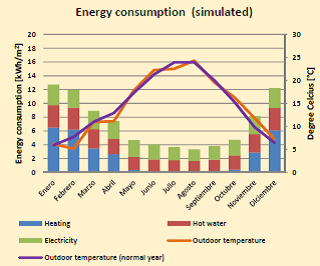 On the roofs of a building from the 50ies, of the IAS Gestión building and of a building with 100 dwellings photovoltaic plants with 2 x 78.55 m² and 157.1 m² have been installed. The modules “FTS-240M” are mono-crystalline cells and manufactured by Fluitecnik (Picture 9 + 10). They have a peak power of 250 W each, so that the plants have 12 kW and 24 kW peak power. The PV Modules are in operation since 2012 and first results are shown in Figure 2.

The improved image of the area is a crucial benefit. From the town’s mayor’s point of view, it was the opportunity to demonstrate to people the importance of energy efficiency and that energy efficiency can mean a comprehensive transformation to improve a neighbourhood - “energy efficiency is good for you” and it is good for the economy. The community was working together to achieve the results and it was possible to convince all owners to participate. An example was set for changing a law. There is now tangible evidence to justify the law and energy efficiency policies. Furthermore, the neighbourhood “Lourdes” is an important political topic, as it is a deprived neighbourhood with different social structures and it had been changing for the worse, almost descending into ghetto status (In the last years, the original inhabitants were replaced by new inhabitants, mostly with migration background, due to the lower rents in the area). The inhabitants are happy with the CONCERTO measures. The original inhabitants of the quarter are strongly attached to the area. The Lourdes Refurbishment won the Spanish energy award “ENERGEN”. A new model of working has been trialled in so far that a set of general objectives has been defined for a neighbourhood, focusing in particular on the needs of poorer people.

Most of the members involved in the project have increased their qualification level due to the project. All members have developed skills related to financial, administrative, construction, social, design, renewable energy and regulatory aspects.

Most building contractors were local. However, the district heating has been installed by Dalkia and the biomass boiler by an Austrian company. Construction companies were obliged to recruit local unemployed people wherever possible (12 were actually employed).

Previously 100% of owners of flats were needed in order to agree to refurbish common areas of a residential building. Therefore, the law (Ley 19/2009) has been changed in 2009 so that only 60% of owners (in terms of number of flats AND in terms of represented floor area) have to agree in order to decide alterations, also owners that do not agree with these plans still are obliged to pay. There is no law that would ensure that existing district heating networks are retained, therefore it is common to replace these with individual boilers, if the system has problems. Also, there is no law in Spain for the preferential feeding in of renewable energy into the grid (i.e. turning off conventional power stations at times of high wind energy production). This makes renewables less lucrative, especially now, with low feed-in tariffs.

S1: Planning permission for Campo de Golf failed in 2009, as the new town/ area was seen to be disconnected from the city – the priorities had changed. For sustainability reasons, extensions to existing areas with existing infrastructure are now preferred. As a result, the project changed- the new buildings in Queiles are part of an extension to an existing part of Tudela. There was also a diverse ownership in residential buildings (lots of different owner-occupiers).

The district heating network for 486 dwellings in Lourdes was sizable – there was no obvious space owned by the buildings that could house the plant and it was not permitted to build it on public land (e.g. under a publicly owned street). There were Difficulties in placing the meters in the common hall-ways. As a solution, a space was found in the end inside previous fuel oil tanks serving one of the buildings. In future a solution might be to make publicly owned space available for low CO2 infrastructure serving private buildings. Furthermore, the new gas boilers were too big. At the time, there was no experience in Spain in installing complex biomass systems. Therefore, an Austrian company was chosen. The main problem was the low quality of used concrete.

Compared with Zaragoza where private investors/ people could only receive subsidies after the work was done (Zaragoza was too late – it was then hit by the crisis), in Tudela, all subsidies were arranged up-front. Therefore, land costs were dropped to make the business model stack up. Due to the financial crisis, the investors in Queiles did not obtain the income expected for the flats. The government support for PV systems stopped as well as feed-in tariffs were stopped, which destroying the PV market. One big loan was obtained for the whole project, therefore its success did not depend on individuals being able to obtain loans.

People want to understand what is happening, want to feel part of the process. They need information. As a solution, a dissemination campaign involved press office and radio. The project became part of an election campaign. 80% of agreement of owners was obtained. There was low interest in energy related refurbishment due to costs. Therefore, a ‘resident’s office has been set up called “Lourdes Renove Ofiece”. It helped owner occupiers with obtaining funding (filling forms etc.). They were being taught about district heating. Additionally, a “social mapping study” was undertaken by the University of Magdeburg.

Pro-active inhabitant involvement from the early beginning of the CONCERTO project.

One big loan was obtained for the whole activities developed in Lourdes area, therefore success did not depend on individuals being able to obtain loans. New mechanism for tender specifications were developed according to building type- this was free of charge for home-owners. Additional money for refurbishment and new building activity could be provided through COCNERTO, reducing costs for owners and tenants in pilot projects’ buildings.

The retrofitting measures in Lourdes were combined with improvements to the streetscape: car parking layout, landscaping – the “feel” of the area was therefore improved comprehensively. Technicians and residents involved in the ECO-city project have visited the Zaragoza demonstration sites in order to see what has been done there so far.

An ESCO is being used, but not a “classic” ESCO-model – it is not financing the heating system (this is financed by a bank). The energy savings go to the owners to repay the bank.

An area of nearby city of Pamplona will be regenerated based on the CONCERTO-approach (the project is called “effi-district”). It contains 1500 dwellings with an old district heating network. The plan is to demonstrate that an effective refurbishment of a district heating systems is possible (as opposed to the common approach of abolishing it and installing individual systems in each unit), an ELENA-application has been planned for the region of Navarra.

A local refurbishment law has been passed (“ordenanza de ajundas municipals”. If citizens want to obtain funding for their refurbishment project from the municipality, the facade, and roof need to be insulated . (Up to now grants covering 30% of costs could be obtained from the municipality for any type of refurbishment. Since CONCERTO energy efficiency measures have to be included. A lift also needs to be installed. RE and district heating is also being supported. The municipal scheme is however unlikely to continue, due to financial situation in Spain.

In Tudela, up to 70,000 m² new eco-dwellings with 350 new buildings help reach the overall objectives set for the project. An additional and politically advanced urban model allows the development of an eco-city where sustainability, bio-climatic areas, and renewable energies are facilitated in the new urban model.

Power supply to the new buildings in Tudela is controlled with a comfort metering system. The objective is to balance energy supply with demand. The ability to store energy is important in this respect, and electrical storage heating will be installed. In principle, all of the energy required to power the project will come from renewable sources, either through application of a green tariff when buying electricity, or through local generation. The city plans to make full use of the sun and wind. Both PV and solar thermal capacity is being installed to take advantage of the sun's power. The PV plant will cover 4,000 m², whilst 2,000 m² of solar thermal collectors are being installed. The community will also boast a wind farm with a capacity of 4MW.

Meanwhile, energy efficiency principles will of course not be neglected, with the 350 eco-buildings featuring bioclimatic architecture, passive solar heating and energy storage in thermal mass.