Trondheim is a city and municipality in Sør-Trøndelag county situated by the Trondheim fjord. With a population of 173,486 it is the third most populous municipality and city in the country. This community has a very strong environmental engagement with strong research. It has an overachieving strategy with several goals that concerns energy and energy related issues; the first aim is that the municipality should contain the Kyoto-target for Norway within themselves.

A new state enterprise, Enova SF, was established in 2001 and has taken over responsibility for state efforts to promote energy savings and environmentally friendly forms of energy production (including renewable energy).

The existing district-heating network at Trondheim has been extended by 12 km of pipelines and a waste incineration plant within the CONCERTO program. This increases the annual heat production by about 200 GWh, which equals to the heat demand of about 15,000 homes. Two absorption chillers have been installed at St. Olav Hospital, generating cooling energy from the above mentioned district heat. An “energy conversion plant”, which is fed by thermal energy of 6 MW, provides 3 MW of absorption cooling power.

In the field of buildings the Eco-City initiative at Trondheim deals with the construction of 350 new dwellings, having a total floor area of 22,400 m². Additionally 24 old dwellings (900 m²) are being eco-refurbished. In the public sector three schools (altogether 17,600 m²) will be refurbished and two new schools will be built. The new built “Nardo” school e.g. is equipped with a heat recovery ventilation system of 80 to 85% efficiency. The new built “Ranheim” school (Picture 1) has a gross floor area of 6,800 m² and is supplied by two sea-water-driven heat pumps of 150 kW each.

The “Ranheim Skole”, opened in fall 2010, (Picture 3) is a new public building at Trondheim with two storeys and a total gross floor area of 6,800 m². It provides space for 650 students. There is the actual school building and a sports arena, each supplied by a 150 kW heat pump. Sea water is the heat resource for those heat pumps, which deliver thermal energy for heating and domestic hot water preparation (Picture 4).
The building envelope reaches very good insulation values (Table 1) and a mechanical ventilation system with VAV (variable air volume) in the classrooms and other areas with intermittent operation provides the needed air for a good indoor air quality. A heat recovery system with 80% efficiency reduces ventilation heat losses. By these measures a calculated energy demand for heating of 43.4 kWh/m²a could be achieved.
Energy meters for the heat pump, electricity main supply and for the heating have been installed and already provide results (Figure 1). 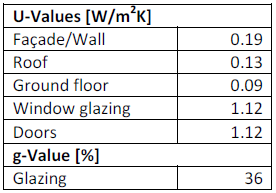 The first part of the absorption refrigeration system at the new St. Olav's Hospital was commissioned in 2004. The purpose of the installation was to reduce the use of the electrically driven compression chillers. The utilisation of the absorption refrigeration system increased with rising number of connected buildings, and in 2007 the total cooling demand was 6.6 GWh. Free cooling plus absorption cooling covered 97% of this need and compressor refrigeration chillers provided peak load energy accounted for 3%. In 2009, the hospital's construction phase 2 was completed, and cooling demand increased to 10 GWh/year.

The absorption chiller machine was by then too small, so that 10% of the cooling load had to be covered by electrically driven compressor chillers. In winter 2009/2010 Statkraft Varme decided to build another absorption chiller, driven by waste heat via district-heating. It was decided to install a new 3 MW absorption chiller (Picture 4), similar to the one installed in 2004, to reduce the use of electrically driven chillers again and for achieving the most environment-friendly refrigerant production at St. Olav's Hospital.

The energy production was monitored during the last years, so that the impact of the new chillers can be clearly seen. (Diagram 2).

A biogas boiler of 1 MW power has been installed at the sewage treatment plant. It is owned by Statkraft Varme AS and had a total investment of 712,500 Euro. It feeds surplus energy from the treatment plant into the district-heating when available. The intention of the project was to exploit waste heat source (excess of biogas) and thereby replacing oil and natural gas peak load by district heat. The Ladehammeren purification plant (LARA) has an average biogas production of 2,750 m³ a day. This corresponds to approximately 6.5 GWh per year. LARA uses approximately 3.1 GWh itself, while 3.4 GWh of gas were flared each year. Picture 5 shows the boiler and the burner. Picture 6 shows the technical room with the heat exchanger for district heating.

With heat recovery ventilation system with 80 to 85 percent efficiency, the Nardo school, is gaining recognition as a best practice case for educational establishments in Norway. A specific innovation is the intelligent metering in ECO-buildings.

(ventilation requirements for schools are high in Norway.

Increase in awareness due to awareness raising campaigns in schools (energy module for schools) information about the project in the local media, Information to local politicians and other information events.

The CONCERTO community of Trondheim encountered barriers at the beginning of the project, lacking the permission to build out of town. The CONCERTO area had been identified out of town whereas Local plans dictated that infrastructure development should occur only within the city limits. It was very difficult to get the permission.

Solutions: After a lengthy negotiation process and numerous requests to different governmental institutions explaining the importance of this to the project’s success, the Ministry of Environment finally issued a permit.

Heat losses due to high ventilation requirements for schools in Norway.

Solutions: With heat recovery ventilation system with 80 to 85 percent efficiency, the Nardo school, was gaining recognition as a best practice case for educational establishments in Norway. A specific innovation was the intelligent metering in ECO-buildings.

The low energy price in Norway (compared to other countries was a substantial barrier to the implementation of measures to further reduce energy consumption in Norway.

When the Eco-City project started in 2005, the energy and climate issue was relatively low on the political agenda. Similarly, both private companies and public bodies did not focus much on for example energy use in buildings.

Solutions: This picture has totally changed since 2005. The Eco-City-project and its stakeholders have contributed to this development. The attitude has changed substantially in the period. The actual building of low energy houses/offices have demonstrated that it is possible at a reasonable cost.

There were several important soft measures supporting the successful realization of the CONCERTO project:

Schools built in very high standards within CONCERTO project are seen now as a pilot projects for municipality to be realised in that way in the future.

The project will set a reference for new standards to prevail in the community both in retrofitting, new buildings, energy supply and use polygeneration. Renewable energy supply comes from an area of 265 m² covered by solar collectors and 750 kW bio-mass fired boilers. Also, an energy conversion central with 3 MW absorption cooling and district heating systems based on waste sources are being applied.

Up to 350 new ECO-dwellings (22,400 m²) and ECO-rehabilitations of 24 dwellings (900 m²) will be realised, as well as ECO-rehabilitation of three schools in total 17,600 m², one commercial/cultural building of 3,000 m².  The Nardo school is being reconstructed with new buildings built largely from wood, with external wood cladding and wood beams as a bearing structure. Heat losses will be minimised by high insulation values (insulation throughout of 30 cm thickness) and requirements on air tightness. A new hospital area of 94,000 m² out of 200,000 m² in total will also be constructed. A waste based district heating and bio-mass supply the eco-buildings together with the application of EE measures.

The Nardo school will feature a heat recovery ventilation system with 80 to 85 percent efficiency, an important factor as Norway has high standards for ventilation in schools. The school, in fact, is gaining recognition as a best practice case for educational establishments in Norway. A specific innovation is the intelligent metering in ECO-buildings.