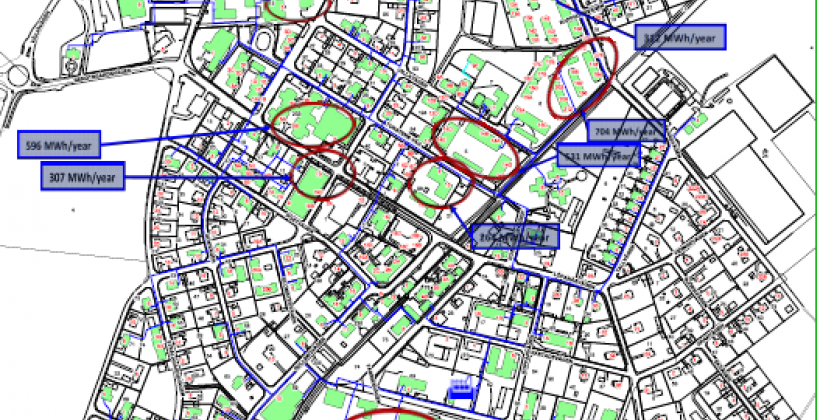 The Växjö Energi district heating system in Rottne (Sweden) is the second largest high temperature distribution network in Rottne, Växjö. It makes up about 10,300 metres with a total volume of about 64 m³.

The production is based on two bio-fuel boilers (1.5 MW and 1.2 MW), complemented with a traditional oil boiler (3 MW) running on RME (rapeseed oil) for peak load usage as a backup. The bio-fuel boilers are operated on local forest residues. On average, the three boilers produce about 11.5 GWh per year. The district heating and cooling network in Rottne, operating since 1997, produces heating for houses, industries and schools in the town of Rottne.

The purpose of the STORM project is to minimize the oil usage and optimise the operational behaviour of the bio-fuel boilers, thanks to the developed controller.

This installation is a classic set-up for temperature distribution and the general problem context is common within many district heating systems in Europe. Hence, Rottne is a good complement to the more specific situation at the Mijnwater BV site.

It is an ideal demonstrator for a generic evaluation of the project technology and it will ensure replicability for other systems in Europe beyond the two demonstration sites.

Before the STORM project’s start, a smart heat grid technology was already installed in the network and performed by NODA. Nine of the largest consumers are equipped with a controller platform that coordinates the heat load demand in relation to the operational production situation. This existing platform was upgraded during the project. The manageable size of this network ensures that it is possible to study full-scale benefits of the project technology in relation to production and distribution.

During the heating season of 2015/2016 the demonstration site in Rottne has been used to deploy and test initial prototype implementations of certain parts of the STORM controller framework. The dispatch functionality, building on the existing NODA platform in Rottne, has been further developed and has been evaluated. This part of the STORM controller is responsible for coordinating the operational behaviour of the individual consumer substations included in the network. In parallel with this, a first version of the head load forecaster functionality has also been evaluated. The forecaster is based on several machine-learning techniques coordinated through an ensemble mechanism. This provides a robust solution for operational heat demand forecasting, which in turn is crucial for the overall optimisation technology.

In the last quarter of 2016, a first version of the central optimisation mechanism of the STORM controller has been added to the functionality in Rottne. The complete range of modules, including forecasting, optimisation and dispatch functionality, will be in operation throughout the heating season of 2016/17.

Learn more about Växjö Energi on their website: www.veab.se