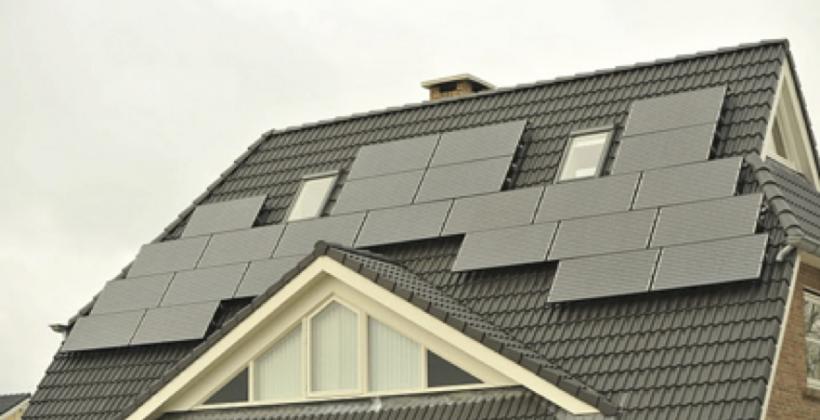 Apeldoorn is situated in central Holland, to the east of Amsterdam and has around 155,000 inhabitants. It has set itself the ambitious target of becoming carbon neutral by 2020 and, through the CONCERTO project, is taking the first steps towards realising this aim by constructing 3,100 new dwellings of the highest energy standard.

In Zuidbroek (Map 1) 611 dwellings have been built to a standards 20% beyond regulations for new buildings. The real estate developers have agreed to an additional package of measures that result in a reduction of electricity demand of 10%. Also a new municipal multifunctional building is being built within the scope of CONCERTO.

In April 2009 an energy neutral demo house (Picture 1) was built and inhabited from that time on. In December 2009 the house was completed with the installation of 30 m² solar panels on the roof and of an intelligent energy monitoring system.

On a number of the dwellings photovoltaic systems of different sizes are supposed to be installed. These small scale PV-Systems will altogether comprise 50 kWpeak. A further system of 125 kWpeak on 5 apartment blocks is planned; there will also be implementation on the facility buildings of „Waterboard Veluwe“ and „Essent“ (50+10 kWpeak).

A biogas plant (digester and CHP units) is installed in the Waste Water Treatment Plant (WWTP) facility at Zuidbroek to convert sewage sludge into energy. Heat from this plant (1.5 MWel, 3 MWth) and from bio-oil fired peak boilers (13 MWth) will be used in the WWTP itself and the planned district heating system. Read further information at the “more detailed” section.

A large woodchip boiler construction is in progress. 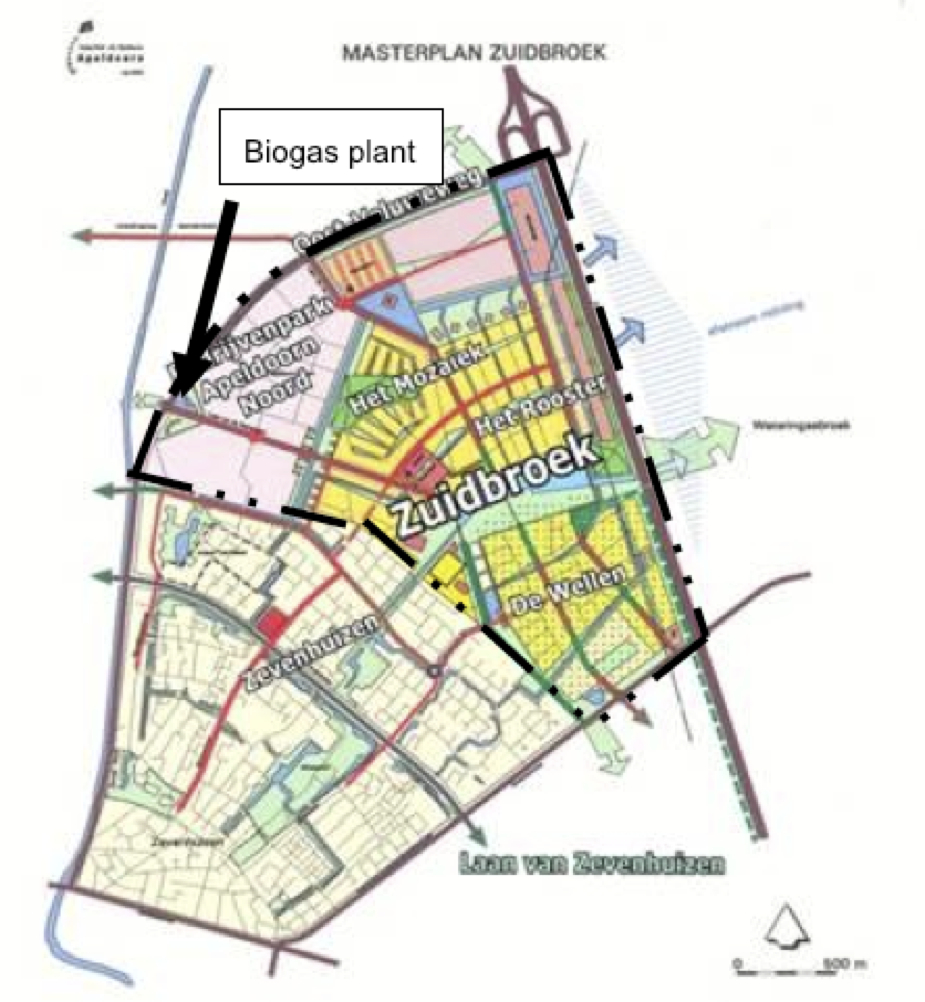 Map 1 - Map of the CONCERTO arear

The biomass plant at Apeldoorn has been realized and is in full operation since July 2009. The biomass plant is now processing approximately 5,000 tons of waste per month (Diagram 1, blue line). The amount of sewage processed is approximately 250 tons per month (Diagram 1, red line), which equals to an average of 1,150 kW electrical power during the last quarter (Diagram 2). This is about 10% more than in the previous year. The efficiency of the motor is 42% for both electrical and thermal power. The amount of electrical power produced equals to the amount of thermal power produced. At the moment the operation of the district heating network is optimized in order to improve the efficiency of the biomass boiler.

The excess thermal energy (the amount of energy that is not used by the biomass plant itself) is put available to ESCO “Essent” for use in the Zuidbroek dwellings. The amount of heat produced and sent to Essent is approximately 1,600 GJ per month during the last 6 months (Diagram 3). Current improvements are performed: optimization of heat delivery to “Essent” (settings changed, control valve and additional pump installed), gas coupling was performed (Picture 2). An improvement of 10% could be reached. 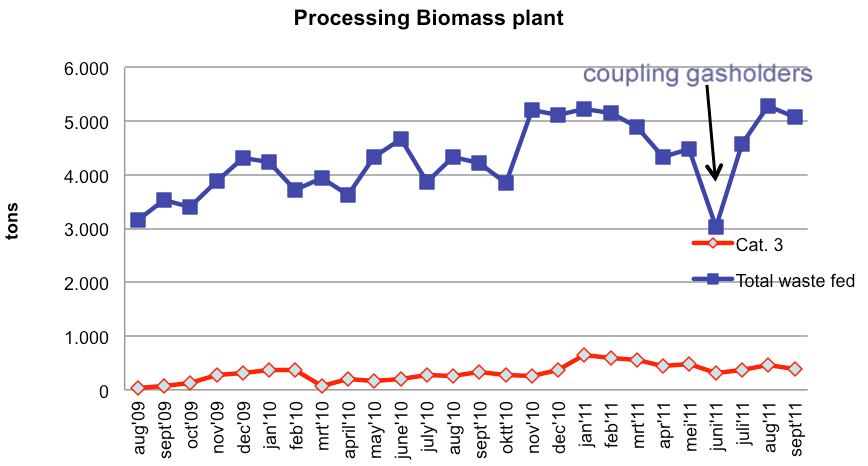 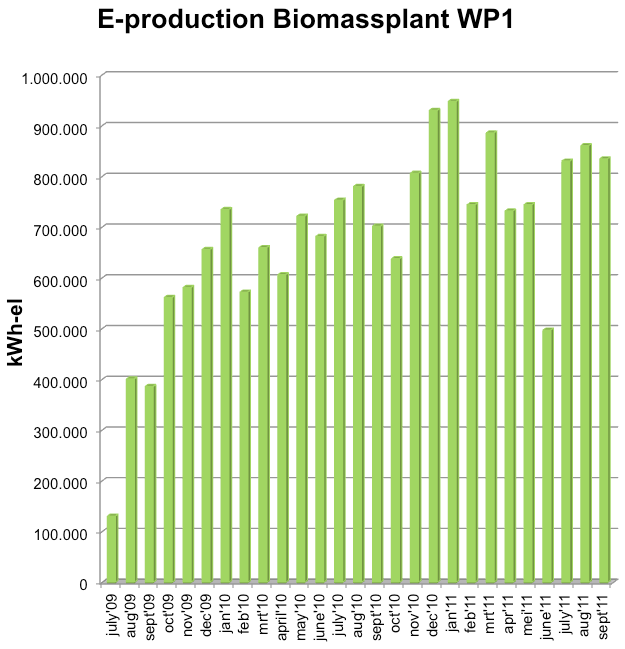 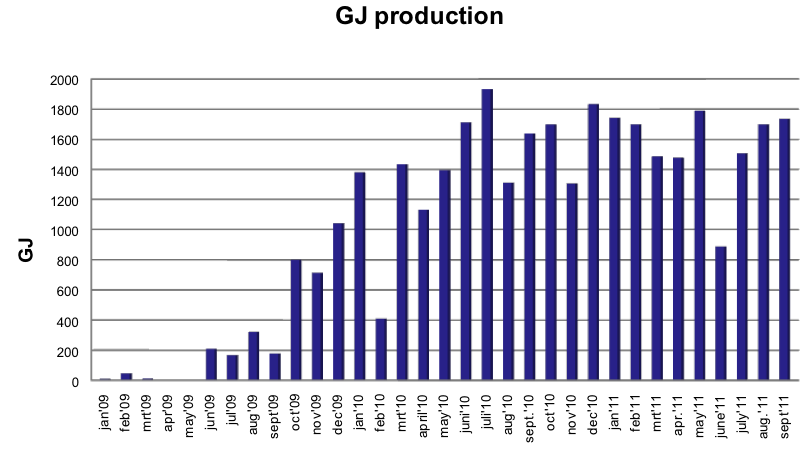 The new area Zuidbroek aims at being carbon neutral by 2020. In its construction, Apeldoorn is putting into practice its belief that good planning, taking into account all key stakeholders, plays a central role in the development of a successful, sustainable community. The main renewable energy source will be biogas generated of the sludge from a waste water treatment plant. This will power a combined heat and power plant with 1.5MW electrical capacity. The generated heat will feed the district heating system.

Further renewable capacity will be added by extensive installation of PV collectors throughout, 1,000 will be installed in total on the district's buildings. The goal is a significant reduction of CO2 emissions caused by fossil fuels for the neighbourhood on its completion in 2015.