Tulln, a town of 14,000 people at the river Danube in Lower Austria, has an excellent basis for its participation in CONCERTO. It has worked for a number of years on becoming more sustainable and on reducing its greenhouse gas emissions. Tulln installed a biomass-based district heating system and the municipality supports private citizens who want to install solar collectors. In addition, much of its electricity is generated by hydropower. Tulln aims to consolidate and build on this process.

A plant oil press has been installed and is now providing fuel for eleven utility vehicles, which have been modified for plant oil fuel and are being monitored (see “More detailed”). Furthermore seven plant oil CHP have been installed.
Some of those CHP plants are integrated into district heating networks. Other district heating networks have been implemented with the integration of biomass boilers (wood chips). One outstanding project is the new construction of 72 dwellings at Michelhausen, where one wood chip boiler produces heat and a second one produces heat and power (see “More detailed”). For gaining free capacity within in existing biomass district heating networks several connected buildings have been insulated to reduce their heating load. An example of a large wood chip boiler integration is the Judenau Castle, which is today an educational institution and supplied by a 350 kW boiler after the retrofit (see Picture 1+2).

An energy management system (DEMS®) was installed at the Agricultural School (LFS) at Tulln. Its supply and load management is supposed to save energy and to reduce costs. A simulation of a 100% supply by renewable energies is performed and followed as a future objective. Transferring data from the local system to the central DEMS enables the comparison with the other SEMS sites Weilerbach and Redange.

A plant oil press has been installed at the Agricultural School in Tulln. The installed technology of the screw press was produced by the Austrian company HDT from Niederfellerbrun. It is a double screw press (Picture 3), which processes approx. 25 kg of sunflowers per hour, and produces an average oil yield of 10 l/h, with the average oil content of 45 %.

Technical problems occurred in the beginning of the operation, as the driving mechanism of one of the screw worms did not work. It was due to the screw worm not aligning properly with the sieve basket filter. On the one hand, it caused abrasion of the basket filter and on the other hand, it let to uneven working process with different heating of the system parts and of the pressed oil. Through appropriate retries and accurate evaluation of different materials, the problem was clearly defined and thus the corresponding parts were replaced. As a result, in the beginning of system’s operation, a much higher human assistance was needed than initially expected.

Eleven vehicles have been modified for the use of plant oil and are being monitored (Picture 4, 5 and 6). Furthermore seven plant oil CHP plants have been installed.

The project has been implemented by the operator “FK Agrar-Umwelt GesmbH”. First a biomass boiler has been installed for providing heat to 72 dwellings. The biomass boiler is fuelled with wood chips, pellets and energy corn. A plan of the network is presented in Figure 1.

In the course of the project, a combined heat and power plant (CHP) with an installed electrical capacity of 30 KW has been additionally installed. The abovementioned furnace produces water vapor, which drives the turbine connected to a generator. The operating data of the two systems can be seen in Figure 2.

The project for the first time in Austria demonstrates a residential housing development (72 apartment houses) as a decentralized energy management system using heat and own electricity supply. For this reason a special attention has been given to these installations within the SEMS project. 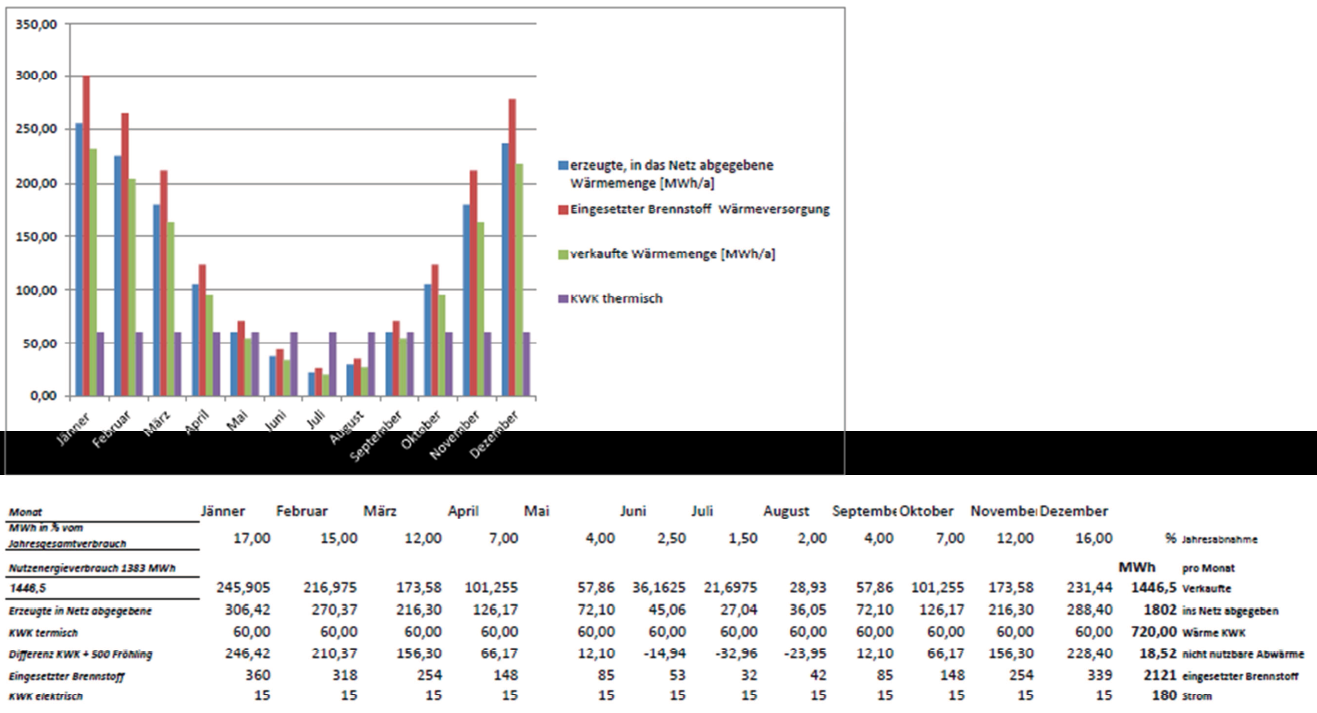 The emphasize for SEMS was on energy management / “energy accountancy” using appropriate energy management systems. It was possible to implement demonstration/ flagship projects which will encourage public awareness and replication. Due to intensified consultation concerning highly efficient heating pumps by an energy consultant, who was a project partner, 126 heating pumps were exchanged or new installed in the project region. These measurements allowed savings of 42.840 kWh per year. The extremely successful solar thermal programme exceeded its targets by far: 518 solar thermal installations with a total collector surface of 5.177m² and a performance of 3.624 kWth. Through intense awareness and information activities the target of 70 ventilation systems has been exceeded by far: Since the beginning of the project 1.003 systems of controlled living space ventilation were installed in total in the project region. These installations have the potential to save 1.743.970 kWh per year and 319 t of CO2.

The target of 1.200 m² of solar thermal or PV installations was more than tenfold exceeded: in the end of the SEMS project it can be reported, that in total 12.652 m² were installed!

The planned plant oil press for liquid biofuel was installed. Initially the operation of the equipment has, however, experienced technical difficulties and requested more man power than usual. After appropriate tests and inspections, the defect was realised and appropriate parts of the installation were changed.

Because of the delay of EC funds, the project partners were forced to delay the payment of subsidies to the citizens . Regarding the planned solar collector for the sports clubs, it was not possible for a number of them to invest in solar collectors, due to their difficult financial status and the ownership structures. It turned out that such investments are much easier for private persons.

Due to political and economic difficulties with the regional electricity company the local energy management system (DEMS) cannot be installed in exactly the same way as originally planned. One reason for this are tariff problems, which do not allow the switching off of RES-power plants as needed. Even though the predecessor project 100RENET assumed that an area with 100000 inhabitants was a manageable size for an energy transition strategy, it turned out, that an area with 84.000 inhabitants (the whole area of the local authority association for waste disposal (GVA)) is already too large for a coherent regional energy transition. Therefore DEMS will be installed as a stand alone solution at the complex of buildings of the SEMS project partner LFS Tulln. The LFS Tulln can be described as small model city: with several single, decentralised electricity and heat producing units (e.g. CHP, wind energy plant, PV) on site and on the other hand the area of the LFS Tulln is a consumer of electricity and heat. The LFS Tulln is in close contact with the provincial energy supplier, which is observing the DEMS installation in the LFS Tulln and might take over the system after the initial phase.

The CONCERTO programme obliged the SEMS core regions to undertake comprehensive monitoring and evaluation of their processes. Thermography was used successfully.

The Energy Change Managers (ECMs) with responsibility for information and communication activities developing subsidy programmes and coordinating of local project activities in the core communities with the local partners was important. The intensive consultation activities of the energy change managers and the various communication activities were very successful in promoting uptake of relatively inexpensive measures such as installations of solar-thermal collectors, biomass heating systems, energy-saving heating pumps, etc. Publicly accessible PC with touch screen to see the current energy flows was installed in the school hall.

The project was able to build on a well-defined framework designed for regional energy transition initiatives, which had been developed under the preceding project “100RENET”.

The construction of district heating networks to which biogas or biomass heating plants were connected went on with particular success in Tulln. There the planning was done systematically and with a stronger involvement of stakeholders. They were not started only after the beginning of the SEMS project, but were part of a longer-ranging planning and adjustment process.

The peak in energy prices in 2008 helped to persuade more people to retrofit EE-measures to their existing houses.

Participation in another EU-project RENERGY (http://www.renergyproject.eu/) – providing € 180.000,- for Tulln. It builds on the longstanding commitment of Tulln in the area of ecological environmental projects, including RE and EE projects. The project is about sharing of best practices and will provide funding for the planning of a CO2-neutral retrofit of the public swimming pool and a Strategy for more efficient streetlighting. A study was made in Mai 2012 for the renovation of the indoor swimming pool with passive house components, heat pumps and heat recovery out of the main sewer.

The SEMS project takes place in four smaller-sized European communities: The community association of Weilerbach (DE), City of Tulln (AT), Canton of Redange (LU) and City of Slubice (PL). All of the SEMS communities are situated in rural areas and have 14,000 – 20,000 inhabitants. The aim of SEMS is to fulfill CONCERTO targets through the implementation of sustainable intelligent management structures within the municipality borders of the communities (associations). The management comprises the regional available renewable energy sources, of energy efficiency strategies, of the communication between key actors in the community and of a broad technical implementation.

Tulln has agricultural surroundings and is known for using energy crops. Regionally produced biofuel is already used in tractors and agricultural vehicles. Moreover, in the SEMS project it will be used for heat and electricity production.

SEMS Video-clip (COMIC) developed by the SEMS Project in Weilerbach:

The old story of the Three little pigs, in the age of the Climate Change, needs to be reviewed: the little pigs, Semsi, Susi and Sibbi, have to face the Energie Riese (the Energy giant) who asks for increasingly higher energy costs. But Semsi, who built a Zero Emission Home, managed to find a way to solve the problem! For an audience of both children and adults, it is a promotion of a sustainable way of living.