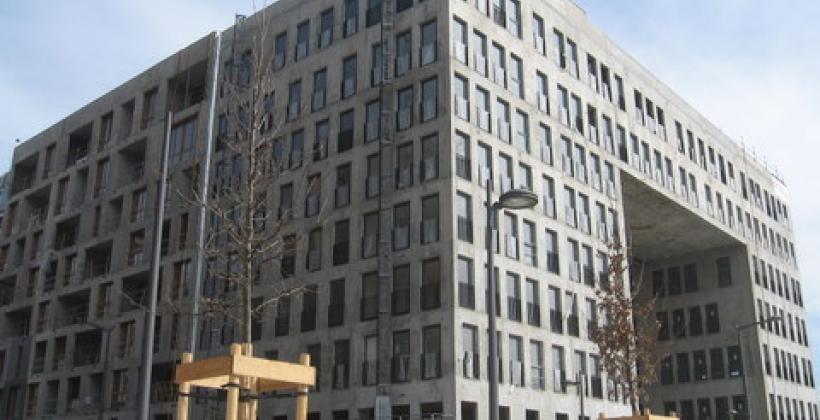 Grand Lyon Urban Community is the 2nd conurbation of France and is located in the heart of the Rhone-Alps Region, which is at the peak of sustainable energy development in France. The Grand Lyon demonstrates through its direct participation in this project its will to make environment-friendly urban and building design a major axis of its commitment toward sustainable development. Drawn out from lessons learnt through the previous EC program RESTART, they intend through RENAISSANCE to upgrade, accelerate and generalise the highest energy standards for all new and retrofitted construction operation in the 2.2 million inhabitants area under their responsibility.

The Lyon’s project involves around 75 000 m² of exclusively new buildings for which tendering procedure has included specific targets both for Renewable Energy Sources (RES) and Energy Efficiency (EE), a comprehensive method that guarantees the best integration of those two main technical components of a sustainable construction approach.

The CONCERTO area at Lyon comprises 21 buildings (660 dwellings and 15,000 m² of office spaces) shared among the three blocks A, B and C. The constructions have been affected by requirements of a good architectural design in combination with improved energy standards, of the use of renewable energy sources and of social diversity. The site of 150 hectares extends the centre of Lyon to the very tip of the peninsula “Confluence”.
At “Block A” (Picture 1) a wood fuelled boiler of 540 kW and photovoltaic panels with a total peak power of 79 kW have been installed. At “Block B” (Picture 2+3) two wood fuelled boilers with 540 kW each and solar thermal collectors (in total 239 m²) supply heating energy to the buildings. Furthermore a photovoltaic system with 121 kWpeak has been installed. At “Block C” (Picture 4) solar energy is harvested by photovoltaics (73 kWpeak) and solar thermal collectors (250 m²). Additionally a 540 kW wood fuelled boiler supplies heating energy to the building.

Altogether 2,800 data meters are installed and enable a detailed monitoring of energy flows (meteorological data, real conditions of constructions, energy consumption). Within the CONCERTO RENAISSANCE project an interactive PV monitoring tool has been developed. This tool aims at controlling the good performance of PV systems, automatic detection of any failure and centralizing all production data on one single platform.

At all the three building blocks biomass boilers (Picture 5), supplied by pellets and wood chips (Picture 6), have been installed. The total metered energy consumption data for Block A, B, and C can be found in Table 1. The primary energy, which is needed for space heating, ranges between 21 kWh/(m²a) and 69 kWh/(m²a). During the heating period, the share of wood in the heat production is 68%. The monthly distribution between wood and gas is displayed in Figure 1.
The number of deliveries realized is 12 to 15 per heating season, depending on the size of the truck (estimated at 15 Mt). The average efficiency of heat production (heat + DHW), without differentiation on the type of fuel, is 83% during the cold season (October to June).

Table 1 – Metered energy consumption for Block A, B, and C

The project proved that political commitment at local level in energy sustainability with financial and methodological support from European Commission can strongly and positively influence policies at national and regional levels. The project experience has been transformed into municipal policy, regulation and practices, thus ensuring immediate replication of the results. Developments for regional and national policies and regulations could be proposed by making the lessons learnt available to others via development of policy guidance notes. Thus mainstream adoption and use of this innovation by other municipalities and urban planners could be facilitated. The project demonstrates that high energy performance buildings are achievable even for big scale operations, implying a strong demonstrative effect at local level. The momentum generated by the RENAISSANCE project substantially contributed to the development of sustainable neighborhoods within the “La Confluence” area off Lyon and therefore to WWF’s choice to select this district as a pilot site for testing their sustainable district label. More specifically, the project also helped change perceptions on the use of wood-fuelled heating in urban areas.

Training of trainers on air tightness was part of the project. The training was divided in three sequences of six hour spread over two weeks, organized by Training institute in building and Public Works (IFBTP Rhone-Alpes), National association for training Lyon-Sud (AFPA Lyon-Sud), adult training centers and the collaboration of the promoter of block B, Bouwfonds-Marignan.  50 On-site workers, 17 Trainers from training centres, 36 Inhabitantsbenefitted from the training measures. Awareness rising sessions for offices employees were also conducted.

In order to mainstream thermal refurbishment of existing building stock while maintaining the social function of the district, a study concluded that the most interesting financial model would be to combine zero interest loans for the property manager with local incentives. However, there is no legal framework for applying for zero interest loans for buildings in multiple ownership.
The calculation methodology of energy needs in the thermalregulations proved to be incorrect. Also, numerous regulations and rules were not adapted to PV technology. The results of a study have enabled Grand Lyon, associated with other French cities, to pressure the government for introducing needed regulation adjustments.

Difficulties to appreciate additional cost due to energy efficiency design.

Social barriers:  The awareness of users is a very difficult issue – they do not realize if a system is not working properly, as they do not know good systems. It is more difficult than in Spain, as flats do not have individual metering, this is seen as unfair – as top floors use less than ground floors etc. It is also comparatively expensive for low energy buildings. There is also a general reluctance to innovation. Historically there is a lack of cooperation between architects and engineers. With a distorted perception that energy efficiency poses undue constraints on architecture.
Residents were involved in the project only once flats were put up for sale, which is suboptimal. However, RENAISSANCE experts, developers and developers joined to organize information sessions to promote and explain building particularities and residents contributions to energy savings.

Technical Success Factors:  Technical support was put in place in the form of monthly meetings to help developers. Thermal simulation tools were used.

Institutional success factors:  Energy requirements which set both technical targets in terms of U values and cuts in conventional energy consumption and organizational matters. A new way of working together, from construction through to operation could be developed. The involvement of developers selected by bid procedures as partners in the CONCERTO project, forced them to create a direct relation with the European Commission under constant control to meet the targets agreed in advance.

Grand Lyon’s implication in the project as official coordinator proved to be highly beneficial. It provides credibility and legitimacy to the project actions, while taking one step forward the internal reflection regarding the leading role of municipalities for the development of sustainable urbanism and energy efficiency. The real estate developers that were involved in the project became convinced of the feasibility and relevance of setting ambitious energy performance targets. The RENAISSANCE project worked on some of the leverages but significant work remains to be carried out for strengthening French municipalities capability in this topic.

In French CONCERTO communities, the use of a public Local Development Company (SPLA) as the Developer Company has proven to be one of the most effective instruments for operating in total respect of competition rules requirements.

The CONCERTO model has now also been used elsewhere, first in Nantes and Grenoble CONCERTO projects and then in other areas. Another refurbishment project in Lyon collaborated closely (it was happening at the same time). Also, RENAISSANCE energy specifications have been subsequently applied to other developments in La Confluence area. Several low energy consumptions buildings have been built with no public funding or a public funding contribution much smaller than what real estate developers in RENAISSANCE obtained, and some energy-plus buildings are currently under construction in the neighborhood of CONCERTO buildings. Grand Lyon partners extended their cooperation for defining a refurbishment strategy on a pilot residential district, the district of Saint Blandine. Changing the public perception of wood fuel in urban areas has served to encourage wood-fuel strategies in other urban development projects in the Lyon area. Know-how transfer with other ZACs in the vicinity and in Paris. The Training model was taken onby National Construction Association.

Grand Lyon has developed in 2003 a set of reference criteria for the construction of sustainable housing buildings (“Référentiel habitat durable”). The “ Housing sustainable energy reference framework ” is applicable to all urban planning or construction development led by the municipality, or located on municipality owned land, or subsidized by the municipality (social housing operations). The second version (2006) benefited from the RENAISSANCE experience in terms of energy performance requirements. The third version published in 2009 had the objective to mainstream low energy consumption buildings by anticipation of the future new French thermal regulation (RT 2012).  Following positive feedbacks from the introduction of energy performance criteria in housing, Grand Lyon decided to expend it to the office and services sector with the creation of a new set of criteria for sustainable offices (“Référentiel bureaux durable”), setting energy performance objectives based on those applying to offices built under the CONCERTO-RENAISSANCE project.

In fact, RENAISSANCE’s first results and lessons learnt strongly contributed to the definition of the energy performance objective of the new thermal regulation (RT 2012), as two Renaissance partners participated in a working group in the so-called “Grenelle de l’Environnement” at national level.  The CONCERTO performance with 50kWh/m2/years for new-build (for heating/ cooling/ ventilation/ lighting) has set a new “reference value”, it provides evidence that this performance is possible. This is more ambitious than regulations and is now obligatory for social housing.

Also at national level, RENAISSANCE partners have been pushing for an evolution of the regulation so as to enable zero interest loans for thermal refurbishment of co-owned residential buildings, as a main leverage to mainstream the refurbishment of the existing building stock.

Specific insights into how sustainable neighbourhood projects can influence local strategies can be gained from the following example:  The pre-study carried out during the first steps of RENAISSANCE project about the construction of a heating network supplied by wood-fuel boilers at the district scale led the Grand Lyon to revisit Heating and Cooling (H&C) networks as a whole. Even if the solution chosen for RENAISSANCE building was individual wood-fuelled boilers at block scale, numerous studies in other districts followed. The project contributed to impulse a strategic vision inside Grand Lyon’s departments concerned by the subject, leading to a political decision to include H&C networks within its jurisdiction and to design an H&C master plan. In 2006, the Rhone-Alpes Regional Council decided to develop a “sustainable housing reference framework” similar to the one developed by Grand Lyon. RENAISSANCE project provided technical inputs to the regional approach regarding energy systems and construction specifications.

sources will provide heating and hot water for all the project´s area buildings, with over 80% of the final energy needs being met from sustainable energy sources.

In addition, 265kWp of PV panels are providing electricity for common parts of the buildings.

Poly-generation through the combination of solar thermal panels (490 m²), on-site wood-fired boilers (about 2,2 MW cumulated) with natural gas back-up provides a fully secured supply system for heating and DHW for all RENAISSANCE area buildings, with a significant ratio of sustainable energy sources over 80% of final needs. 265 kWp of photovoltaic (PV), added to the 11% of RES from grid-based mix, will provide over 60% of the power needs of residential common parts and 30% of whole offices demand

This project is the very first one in France on this scale (78,820 m²) to reduce to this extent the consumption of conventional energy (-77% compared to standard practice).