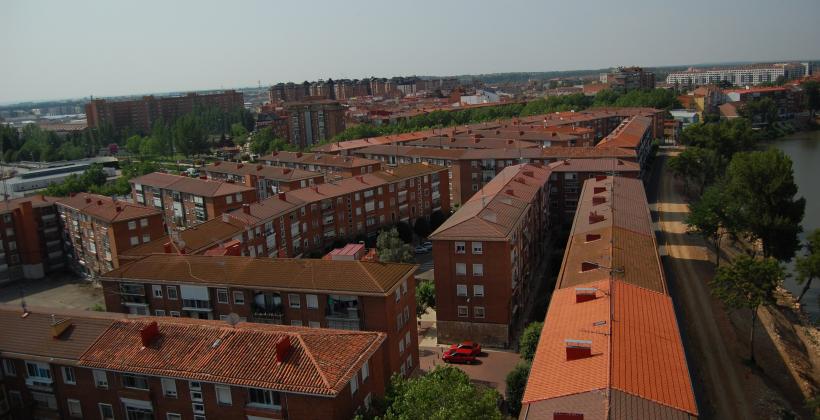 A complete retrofit based on facade improvements, ICT and renewable energy systems is being implemented in the Cuatro de Marzo district, the demo site chosen for the R2CITIES project in Valladolid.

The district of Cuatro de Marzo is located in the southern part of the city’s urban area. Built between 1955 and 1960 as a suburb, the residential area is now right in the commercial centre of the city. It consists of 1941 dwellings, distributed across a total of 190 buildings, considered to be of medium-to-poor constructive quality and progressively ageing. In addition, there are four schools, one church and 25 business premises. The district is characterised by a high population density (200 inhabitants/ha) and high construction density.

The city of Valladolid has been actively supporting and promoting urban restoration projects in the district. When it comes to R2CITIES, the municipally-owned company VIVA plays the role of coordinator and supervisor of the refurbishment works, encourages apartment owners to join the retrofitting urban plan, and negotiates with commonhold associations to secure approval for the renovation works.

Before the intervention of the project, Cuatro de Marzo dealt with common problems such as heating loss, residents’ discomfort and very high energy consumption. As a result, energy-efficient measures within R2CITIES aimed at reducing thermal consumption through insulation, shade improvements and ICT implementation, and electrical consumption through the installation of occupancy sensors in common areas, more efficient lighting equipment and the provision of detailed billing. Another objective was to reduce CO2 emissions by means of renewable energy systems such as photovoltaics and thermal collectors.

Overall, the gross floor area of 21 000 m² has been refurbished in the demo site in Valladolid. The annual final energy saving is 1 816 MWh and the total CO2 emission savings amount to 575 tonnes of CO2 per year. The total investment cost for all interventions is EUR 2 068 274.

The interventions in Valladolid included: