The CONCERTO community in Ostfildern is a district named Scharnhauser Park. The Scharnhauser Park is located on the site of a former US military base, which became available after American withdrawal as the Iron Curtain fell. It covers 150 ha in the municipality of Ostfildern, a town of 35,000 people on the eastern borders of Stuttgart.

Combining work places, residential areas, and green park sections, it leads to an integrated living and transportation concept with high comfort and low energy consumption. The project is designed as an exemplary ecological community development, where a wood fired co-generation plant delivers electricity and heating energy.

In the course of the project more than 37 kWpeak of new photovoltaic systems have been installed. The most important plant has been integrated in the building containing the combined wood heat and power plant, where both its south façade and the complete flat roof have been equipped with dark mono-crystalline modules. A hydropower system at a high-rise freshwater storage tank has been installed and shows a constant energy output of about 220,000 kWh per year.

A wood chip power plant, designed for 6 MW thermal output in permanent operation (Picture 1), provides the major portion of the energy supply for the Scharnhauser Park development project. At peak periods and as a reserve, two natural gas boilers (5 and 10 MW) are additionally available. Each year 80 % of the heating energy and approximately 50 % of the electrical power needed for 10,000 inhabitants are produced. Through substantial modernizations and extensions at an existing district heating network of the former military base it now spreads over a length of more than 13 km and enables all the inhabitants of the Scharnhauser Park to use this environment-friendly energy supply.

As the first plant of its kind in Europe a lithium-bromide refrigerating machine has been installed in the new office building “Elektror” in Scharnhauser Park (Picture 2). The unit is supplied with the heat from the above-mentioned district heating system (DHS). The plant provides a cooling capacity of 150 kW and is connected to a modern system for concrete core activation. Due to the relatively high cold-water temperatures (9° C and 15° C), this system enables a high efficiency of the chiller.

In the frame of the POLYCITY project a total of 178,000 m² of residential and commercial buildings has been constructed. The “Scharnhauser Park” (Picture 3) can be divided into three different areas: tower houses in the north, individual row houses in the east and four-story multi-family houses with extensive green areas in the west. The following measures led to high efficiency: reinforced exterior wall insulation, windows with improved environmental values, low temperature floor heating, living space ventilation and quality controls using Blower-Door-Tests.

Beside the “Elektror” office building various other ambitious buildings have been constructed like the “City House”, the School Centre and the Youth Centre in Ostfildern. At the Youth Centre the opaque parts of the building envelope were implemented to comply with passive-building standards and the windows were designed according to low energy building standards. Thereby a very low annual heating demand of 32 kWh/m²a could be achieved, which is provided by a heat pump with geothermal boreholes as heat resource. Additionally a mechanical ventilation system with heat recovery capability and a ground-to-air heat exchanger have been installed.

The company “Elektror” has built a new office building (Picture 4) with an affiliated Research and Development tract in the “Scharnhauser Park” area. The building sets innovative standards not only in terms of architecture.

The energy supply for the large building of about 4,500 m²  is provided through district heat from the combined woodchip heat and power plant. For this project, all of the cooling necessary for office buildings will be strictly thermally produced using a lithium bromide refrigerating machine, as opposed to the electric cooling production which is still standard nowadays. The heat energy needed for this will be entirely produced with renewable energies in the woodchip heat and power station. Thus, seen from a primary energy point of view, cooling compared to compression chilling is much more ecological. In order to cool the office building even more efficiently, instead of using a strictly air-based method to distribute cooling, the basic load is conducted by activating the concrete inside the individual floors. By making use of the concrete floors’ potential for storing thermal energy it becomes possible to use the refrigeration machine very efficiently and reduce the maximum output dimension of the power unit. In case of heating this concrete core activation system is also used to cover the basic heat load requirements. Since the building for static reasons had to be founded on concrete piles anyway, these concrete piles were designed as so-called energy piles. Like in the case of geothermal probes, water tubes have been installed inside the piles. These tubes deliver the heat to the ground in summer and take heat from the ground in winter. The extra costs for these energy piles are small compared to the expected additional cooling power of around 30 kW. The amount of energy won by the energy piles is supplied to the existing ventilation system of the building. In this way the outer air to be injected into the building can be neutrally (in terms of primary energy) pre-cooled in summer and pre-heated in winter.

As part of the POLYCITY project all the data generated during operation is recorded, collected and evaluated in order to optimize the regulation of the building-technology components.

A wood chip power plant designed for 6 MW thermal output in permanent operation, will provide the major portion of the energy supply for the “Scharnhauser Park” development project. At peak periods and as a reserve, two natural gas boilers (5 and 10 MW) are additionally available. Each year, 80 % of the heating energy and approximately 50 % of the electrical power needed for an area where 10,000 people will soon live and work, are produced by this plant.

Power production is enabled by a so-called Organic Rankine Cycle (ORC), a steam turbine process with organic working fluid, which can be operated without high pressures or temperatures and which can therefore be good combined with biomass firing. By this simple but refined concept, an economic and material-friendly process has been achieved compared to traditional water vapor power plants and is probably the most suitable type of plant for small- and medium-sized decentralized stations. The ORC can, by nature, adapt flexibly to the heating needs of the inhabitants with an almost constant high degree of efficiency. Considering the small dimensions of the station and the correspondingly low sound emissions, this plant concept can be particularly well integrated into the architecture of a district.

Strong emphasis was put on finding a system that was both reliable and had a low rate of emissions. A complex filter equipment and a permanent emission monitoring provide pure air. The power station operators provide 24 h on-call service and guarantee a trouble-free supply for the inhabitants of “Scharnhauser Park”. With the POLYCITY project, improvements have been possible in the areas of data acquisition and power station regulation. The planned retrofit equipment for exhaust gas condensation can increase the thermal power output of the wood chip power station by around 1,000 kW and thus, can contribute to a corresponding saving of biogenous and fossil fuel resources. 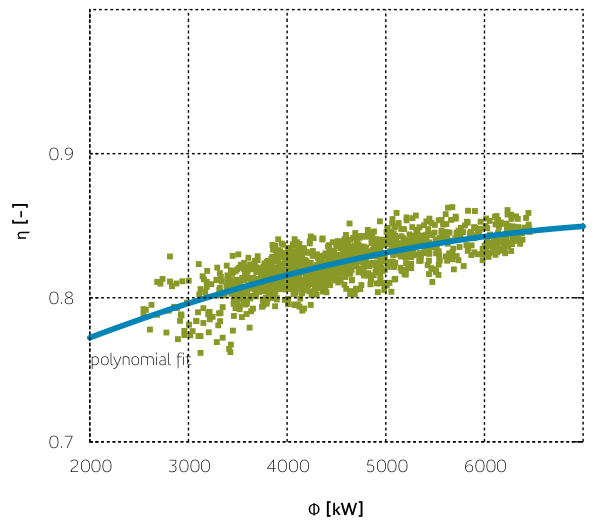 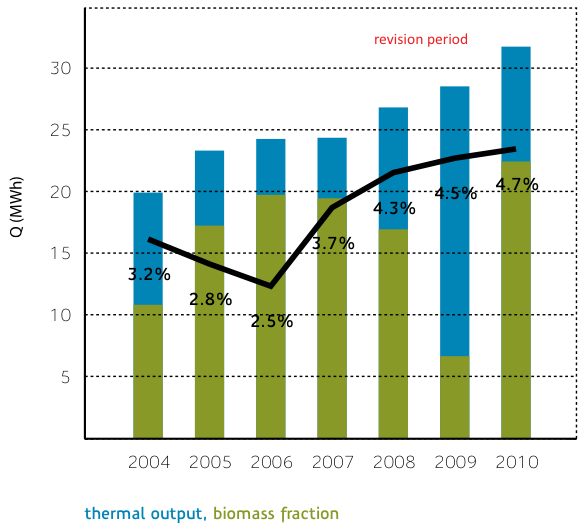 Regeneration of a brownfield site; increase in density; low CO2 emissions; a visible translation of the town’s vision into reality that proves that it is possible; transparent monitoring results, e.g. heating energy costs; gain in reputation through this flag-ship eco-project and Scharnhauser Park was a driving force of Ostfildern’s development.

The POLYCITY experience showed, that it is nearly impossible to compare buildings in Spain with buildings in Germany or Italy because the methodologies for the classification of buildings are different in each country

Technical barriers: A serious accident in the biomass plant.

Youth center: This was too remote to make connection to the district heating financially viable. Triple glazing for PassiveHaus-standard would have been too expensive.

Solution: The youth center was treated as a micro-system, built to approximately PassiveHaus–standard and with its own heatpump. Double glazing had to be used.

Even though resident were relatively committed, initially there was some resistance towards behavior changes. The interest amongst inhabitants grew with each visit of project staff, competitiveness between households developed.

The energy supply company “Stadtwerke Esslingen” (SWE) constructed the wood-fired ORC biomass cogeneration plant providing the whole site with district heat. They also implemented photovoltaic systems into the façade and the roof of the power plant and are contractors for biomass powered thermal cooling. SWE outsourced the running of the installations to an external company.

An energy contracting model was used for the cooling energy supplied to a company based on the Polycity site (a company dealing in hydraulics). The cooling energy costs have been fixed for 5 years. Costs were higher than those for electricity, as they also contained maintenance costs.

Replication in a technical sense are concentrated on biomass technology and energy efficient building management.

Within the municipal area of Ostfildern various villages started their own biomass projects. Via the University of Stuttgart expertise gained on Scharnhauser Park were fed into a project in Ludwigsburg, where the local electricity company (Stadtwerke Ludwigsburg) constructed an ORC biomass power plant. Via the University of Stuttgart expertise gained on Scharnhauser Park also fed into a research project in Poland (Technical University of Opole in cooperation with the National Forestry Office) with particular focus on optimum moisture content of biomass. The municipality decided to use the smart metering technology provided by the company Ennovatis and tested as part of the CONCERTO project in the two demo buildings Stadthaus and youth center for other public buildings (mainly for schools) as well. The POLICITY experience was also beneficial for several energy efficient urban development projects, for example: Revitalisation of 14 hectares of a former military area in Gniezno, West Poland. New Housing estat “Tarasy Wierzycy” in Gniew near Gdansk (independent biomass heating system combined with a solar collector system for domestic hot water for 144 houses that were built in 2008).

Due to the success of POLYCITY Ostfildern is now considered to be a flag-ship municipality, even though it is difficult to find tangible changes in policy (for example the commitments under Covenant of Mayor were found to be too difficult). However, the local political landscape has clearly changed considerably due to POLYCITY.

Community project which leads into an integrated living and transportation concept with high comfort and low energy consumption.