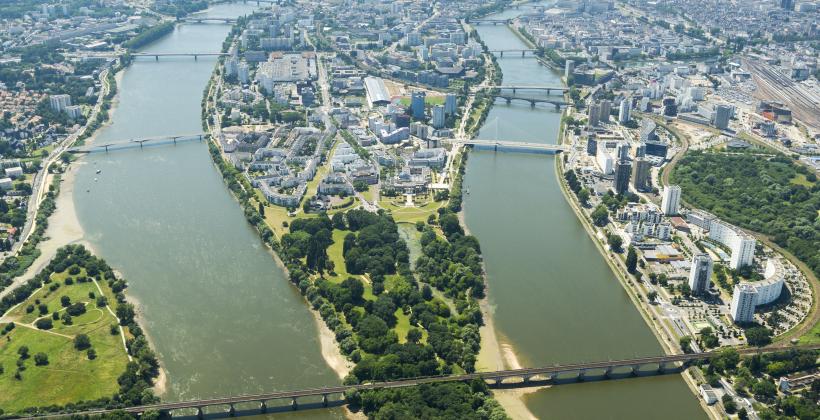 Nantes is not only the sixth largest city of France but also a very attractive place to live.
Counting the inhabitants of the metropolitan area, 600,000 inhabitants are enjoying a high quality of life. With an increased population of 22% over the last 25 years and 100,000 new residents expected by 2030, the major challenge of Nantes is to keep this high standard in times of demographic expansion. Creativity in urban planning and sustainable development has been the key driver during the past years. Nantes Metropole has invested a lot in research and innovation. These efforts combine a high quality of life with a dynamic urban development.

The "Ile de Nantes" (Island of Nantes) is one of the eleven districts of Nantes and the demonstration area which concentrates most of the planned activities of mySMARTLife: 4.9 km long and 1 km wide, located in the centre of the city of Nantes, the two branches of the Loire River define the island's boundaries. The demo area is divided into three zones with different objectives where the 47 mySMARTLife actions are carried out:

As part of mySMARTLife, Nantes Metropole has developed a single desk for energy retrofitting in order to boost energy retrofitting at metropolitan level (covering 24 cities including the City of Nantes). The web-based platform called "monprojetrenov" offers residents a large set of services such as the opportunity to energy audit their homes in order to prioritise retrofitting works; to identify financial support and signposting them qualified construction companies. All services and information related to retrofitting are found on monprojetrenov.nantesmetropole.fr which has become the main tool for the new strategy to promote retrofitting at metropolitan level.

In addition to "monprojetrenov", an innovative retrofitting scheme for individual houses has been developed. It includes the insulation of attics, walls and the installations of smart thermostats in combination with hybrid solar systems. The geographic scope of this action comprises Ile de Nantes and its southern neighbourhoods. This scheme demonstrates the feasibility of introducing new technologies such as intelligent thermostats combined with solar hybrid systems in single-family homes. As part of the scheme, ten individual houses are being retrofitted and tested for further replication.

"Parking des Machines", a car park in Quartier de la Creation (new construction area in Ile de Nantes) will be transformed into a renewable energy hub. This car park will be covered with a solar photovoltaic canopy, a solar power management system deployed, battery storage installed and soft mobility actions implemented like charging stations for electric vehicles, storage service and low carbon last kilometre delivery services. Special emphasis is given to the innovative energy storage system. The system delivers energy on a continuous basis and helps to smooth the electric load curve by adjusting solar energy production to consumption (solar energy stored in a battery system to allow for consumption during the night).

mySMARTLife has the objective to promote the development of citizens or collective photovoltaic (PV) projects and analyse technical, organisational and business models for further replication. Demonstration projects were identified as part of the project and a solar cadaster developed (see below).

The first demonstration project (M.I.N industrial estate) has 30,000 m² of exploitable roof. A PV plant of 30,000 m² of panels, 5MWp producing 5 GWH / year will be installed by the end of 2018. The self-consumption demand represents 500kWp for about 10% of the installed area.

The second project is Malakoff – a collective self-consumption project consisting of a PV plant on a social housing building that is connected to a nearby school and another council-owned building and will be implemented in 2019. Both building complexes are complementary in their energy demand. As for the social housing building, the energy demand is high in the morning and in the evening, whereas in the other public facilities, the demand is low in the morning, high during the day and low in the evening.

To facilitate the deployment of small PV projects by citizens, Nantes Metropole has promoted the development of a solar cadaster with a consortium of companies and research centres led by “In Sun We Trust” start-up (see also https://nantes-metropole.insunwetrust.solar/). As a result, a scalable and innovative web platform has been developed. The platform models the solar potential per roof section of 1m2, gives an estimate of potential gains / savings achievable through a solar installation and lists relevant companies for the implementation of solar projects.

In the mySMARTLife demo district Ile de Nantes, two buildings will be equipped with digital boilers of around 20 MWh per year, each connected by optical fiber. The first one is a new social house “hospitality pole“ under construction (over 900 m2) including catering, hygiene and health services for the poorest of Nantes. The second one is a social housing building (over 2 200 m2) composed of 28 dwellings and a space for commercial activities.

An emblematic action in the mySMARTLife project is the replacement of the current Busway line (BHLS) fleet with 22 fully electric buses by the end of 2019. This action will take place on a heavily frequented bus rapid transit line which has reached its limits (43 000 passengers/day) with high frequency (one bus every 2,5 minutes at peak hours).

Analysis will be done on the impact of a large capacity electric bus (24 m, 150 passengers, up to 55 000 passengers/day) on the grid and on the reduction of energy use, noise and pollutants.

Twelve charging stations will be installed for the e-buses, as strong impact is expected on the grid. To alleviate it, charging stations located at certain stops along the line and at the bus terminus will allow energy transfer from the electrical network to the batteries of the vehicles. The energy transfer between the vehicle and the charging stations is carried out by an articulated arm located on the roof of the bus with a smart energy management system of "opportunity charging" (called TOSA). The bus equipped with the system recharges quickly on the passenger exchange time at a bus station (2 seconds for connection, about 20 seconds for charging) and at the terminus (a few minutes) with a power of 600 Kva.

In addition for e-cars, 90 smart charging stations will be installed until the end of 2020 and connected to Nantes’ engagement portal to provide information such as availability and location to users. For e-bikes, their overall number will be dramatically increased. By 2020, around 1,500 e-bikes will be available for long-term rental and 200 electric plugs will be installed in bike lockers and bike parking.

Giving value to data is a key ambition for mySMARTLife project. As a transversal action to all energy and mobility actions of the project, Nantes Metropole and ENGIE work together to develop and integrate urban platform extensions into Nantes Metropole’s existing information system. These extensions are oriented towards: