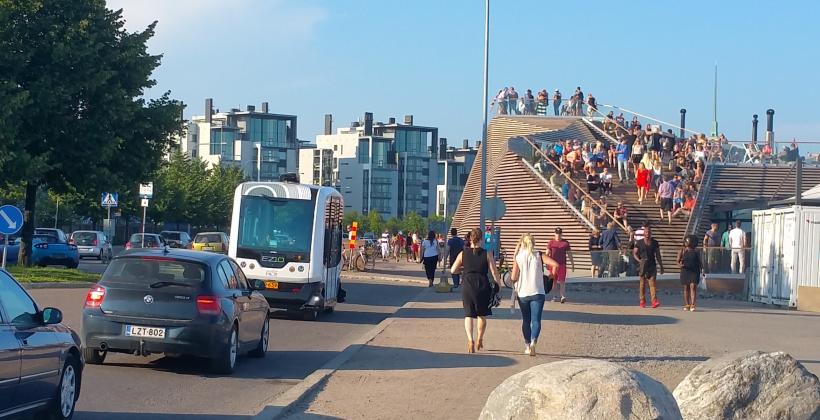 Helsinki, the capital of Finland, has a population of over 626,300 inhabitants and greater Helsinki does even count up to 1.4 million. Helsinki is Finland´s major political, educational, financial, cultural and research centre as well as one of northern Europe´s major cities.

Helsinki is continuously at the top of comparisons and evaluations of the European and global smart cities. The smart city development is determined by the strong role of the city where the staff actively works directly with the citizens and other stakeholders. In areas where the city owns the land this offers a good opportunity to directly influence the integration of smart home solutions in new buildings. Secondly, the city owns a utility company which is in charge of the electricity as well as district heating and cooling grids and is also main provider of electricity for these grids. These facts allow the city council to make independent decisions on the energy development of the city. Finally, as a complement to this, the city has strongly invested in open, digital technologies for smart city developments.

As allocated to the project pilot, the first apartment building with 167 apartments has been equipped with smart thermostats in every room. The thermostats can be connected to the Urban Platform through IoT. Piloting of smart heating control and early testing of heat demand response is on-going in the retrofitting areas of mySMARTLife.

Kalasatama is a new construction residential area in Helsinki (67 buildings and nearly 4,500 flats). The Kalasatama development stipulates required integrated smart technologies for all the buildings; therefore, Smart Home solutions, including smart meters will be installed in all flats.

mySMARTLife project actions targeted in this area mostly cover information collection and the co-creative development of the smart energy district in close collaboration with the Smart Kalasatama project. Integration of renewable energy systems and waste heat in the buildings as well as demand response actions are some of the features implemented and analysed in Kalasatama.  The coal power plant in the area will be phased out by the end of 2024 and its replacement through innovative sustainable energy systems is a challenge adopted by mySMARTLife.

The demand response commands are under development as to better integrate them into the planning of Helsinki’s heat generation needs. The human thermal model is also analysed for further improvements of comfort and individual level heating optimisation. Knowledge and incentives are being shared and information exchanged with local residents such as the housing associations representatives in order to increase impact and motivation to support energy efficiency measures. The long-term target is to retrofit all 12 buildings in the area.  In addition to the mentioned measures, heat leakage imaging is planned to support the evaluation of the building performance.  The implemented retrofit measures are expected to lower the total energy consumption by 10-15%.

Viikki Environment House is a high-performance office building in Helsinki. Part of the energy consumed in the building is produced on-site: the solar panels placed on the façade and roof cover 572m² and produce 20% of the energy consumption along with four wind turbines. The energy needed for heating water and interior spaces is supplied by Helsinki’s district heating network. The cooling is supplied through a cost free borehole water system that consists of 25 boreholes each 250 m deep and making 95% of the cooling energy renewable.
A building automation system has already been implemented to couple the need of energy and heat and electricity production. The storage is connected to other building energy loads to enable better optimisation and provide the nearby public e-car charger with solar energy.

Viikki Environment House has been equipped with smart heating control and demand response along with modifications to the existing building control management on heating and electricity optimisation.

An innovative district-level electrical storage system has been integrated into the existing solar plant and EV charging network as part of mySMARTLife.  The facility consists of about 15,000 lithium-ion battery cells, which can temporarily store the electricity generated by the solar power plants in Suvilahti (340 kWp) and in Kivikko (850 kWp) operated by the energy company Helen. The rated power output is 1.2 MWs and its energy capacity 600 kWh. New business models and energy products are being developed and promoted. Multiuser applications will be demonstrated in reserve power, peak power shaving, and energy time shifting as well as voltage support.

The existing efficient district heating system is being optimised by increasing the share of low-carbon and renewable heat. Strategies to optimise the user demand response and the producer interests by focusing on maximising heat and cooling system-level storages in the network will be developed as part of mySMARTLife.

The development of technical and business models for reactive power compensation when applying solar power systems is being studied. The aim is to find out how reactive power can be most economically compensated when introducing photovoltaic systems into the network. The related impact analysis and monitoring of large-scale up-take of electric buses to the grid is researched. An innovative concept to compensate the reactive power with a solar photovoltaic plant will be studied to make the system more efficient.

Helsinki’s ambition to invest in public and multi-modal transport as well as sustainable and electrical mobility is strong and citizen activities as well as involvement in these topics is very high. Large-scale up-take of electric buses in Helsinki region will commence with the first 12 fully electric buses deployed to commercial operation in the pilot phase (2017-2018) and continue operation in a living lab environment. Detailed measurements of a pre-commercial pilot are extended to operational analysis of the growing fleet. 10 % of the fleet will be fully electric in commercial operation by the end of mySMARTLife. The impact to the residential areas will be monitored with noise and air quality sensors.

Helsinki’s Urban Platform will be upgraded through the up-take of new open data generated in mySMARTLife, as well as sourcing the heat leakage images of building facades to support the refurbishment activities. The 3D city model and IoT platforms are implemented and data available from the sectorial ICT systems will be utilised. Helsinki’s Urban Platform will keep within the European open data and open API contexts, including the input from EIP SCC, FIWARE and OASC. The OGC open standards such as CityGML and SensorThings will be widely used. The generated data will support Merihaka & Vilhonvuori and Kalasatama building related actions.