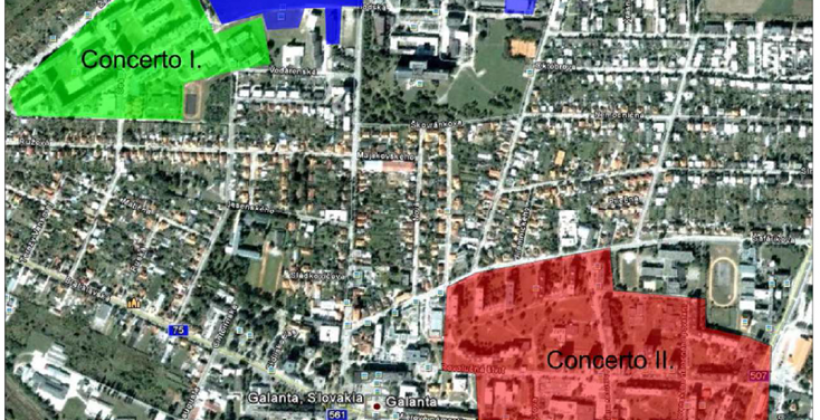 Galanta is situated in the south-western part of Slovakia, near Bratislava. Spread over 396 ha, the town has 16 500 residents. The exploration of geothermal energy in Galanta began back in the 1980s when drilling works for geothermal wells were initiated. Since the mid-1990s, these wells have been used for heating the energy supply via district heating.

The focus of the interventions in Galanta as part of the GEOCOM project was on the complete refurbishment of designated buildings (residential and public), including photovoltaic installations and the connection of additional buildings to the district heating network.

Overall a gross floor area of 18 183 m² was refurbished by applying insulation to outer walls, and replacing doors and windows. As a result of the energy efficiency, 850 MWh/yr of final energy are being saved in the buildings that underwent retrofitting activities.

Three multi-storey residential buildings, an elderly care home and a medical laboratory were connected to the district heating network, with a total consumption of 1983 MWh/yr. From the point of view of primary energy demand, an average total primary energy savings of 714 MWh is achieved every year from this connection.

Three residential buildings are retrofitted and will be equipped with photovoltaic systems (Picture 1). For each building a photovoltaic system with an output of  2,16  kWpeak will be deployed, sufficient to light the common areas of a housing unit with up to 48 apartments. The elementary school will be retrofitted as well: the lighting system will be renewed and a  4,86 kWpeak photovoltaic system is installed. The total annual energy yield is predicted to be up to 5,300 kWh per year (calculated on solar radiation values in the Slovak republic). Besides the improvement of the building’s envelope there will be thermostats installed and reconstruction of the supply pipes.

For expanding the existing usage of geothermal energy (two wells are being used since 1983/84) reinjection borehole research is being performed. To secure the geothermal capacity for the next generation the recent system needs a reinjection well, which is injecting the non-used or wastewater back to the reservoir. Now this “waste water” is pumped into river Váh and sums more than 500,000 m³ a year.

New areas are supposed to be connected to the district heating network (Picture 2). A further CONCERTO activity is the connection of the natural gas heating plant to the geothermal circle to substitute part of the gas consumption by geothermal energy. At the current state the natural gas consumption from April to October counts to 130,000 m³. The length of the connecting pipes will be 2 times 1,296 meters.

The main goal of this project part is to improve the environmental performance of the existing geothermal heating system (Picture 3), which mainly depends on the possibility of reinjection into sandstone. From the perspective of sustainability and environmental suitability of solutions, reinjection could be an important step, as nowadays over 500,000 m³/year of waste geothermal water is pumped into the river Váh. As part of the project activities, a geological survey, additional studies and the full documentation of a reinjection borehole will be developed. Furthermore a new connection will be constructed and new multi-story houses (pipline length 2 x 220 m), an old people’s home and a biotechnical accessories producing company (pipline length 2x82 m) will be connected to the geothermal system in the first phase. The junction will provide heat and domestic hot water all year round and will be realized by a double pipeline system, which will be connected to the existing circuit of the energy centre and the exchange stations. The new area that will be connected to the geothermal heating system has a great potential for further enhancement.

Based on the potential for further development of the area, the project procedure can be divided into two main phases. Initially following existing buildings can be connected: a multi-story block of flats (37 dwellings), an old people’s home and a microbiology laboratory for the geothermal system. The estimated heat provided will be 3,538 GJ/a (ca. 1,000 MWh/a). For the second phase, two multi-story blocks of flats are planned in this area with total numbers of 74 dwellings. The heat provided at the second phase will be approx. 2,100 GJ/a (ca. 600 MWh/a). As this new location has great potential, the municipality is planning to create a new town district with multi-story blocks of flats, which will mean a new phase in the geothermal energy expansion in Galanta.

The following interventions were implemented in Galanta as part of the GEOCOM project:

The investment cost for the intervention was EUR 60/m², making a total of EUR 1 million. According to the provided data, the yearly cost savings for energy result in EUR 116 070 for the monitored values. The costs saved by the interventions amount to EUR 38 927.

The resulting payback period is 28 years for the whole project. The payback period for all the refurbishment measures is 22 years. The elementary school has the shortest payback period with 15 years, the kindergarten the longest with 25 years.

Benefits of CONCERTO:
Key benefits:
Improved energy efficiency of geothermal heated buildings (multi-level houses and school), what produced extra capacity of heating which can be used for heating a new multi-level house and elderly house.
A striking synergic effect of the retrofitting – new multi-level houses were retrofitted after the project activities on the geothermal heated housing development, which is one of the target places of our project. These new retrofitting activities are financed by inhabitants via bank loans. Our project showed them, how a retrofitted multi-level house looks like and what are the benefits.
Improved and extended geothermal district heating by connecting to new buildings which will be heated by this source.

Solutions: Launching the implementation processes of these activities in slight advance compared to schedule

Technical barriers:
No previous experience with photovoltaics.
Solutions:
We managed various meetings and consultations by project office that planned our photovoltaic project.

Savings on operating costs due to retrofitting, extending and ensuring the future of geothermal district heating in Galanta

The CONCERTO project has broken a psychological barrier of dwellers to retrofit their multi-level houses. They saw, that it´s possible to realize, it looks nice and it worth that money due to savings on heating.

The Concerto activities will be focused on the further utilization of the geothermal energy, which is a unique treasure of the city and on the integration of the renewable energy sources. The municipality's effort is to use this green energy widespread in the city and assure this energy for the next generations. Because the refurbished buildings need less energy, more geothermal energy can be used for the domestic hot water production of other buildings in the Concerto area.

The geothermal energy is used for heating and for the production of domestic hot water. Residential buildings (6-8 floor block of flats), a hospital, an elderly house, a nursery, a primary school, and two groceries are heated by geothermal energy. The rest of the city is heated by natural gas.