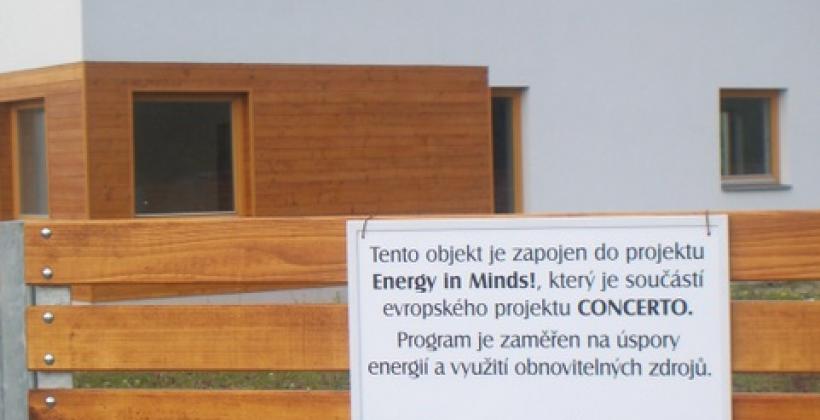 Zlín is a largely industrial city with a population of around 76,000 inhabitants. Its suburb, Louky, with around 1,600 inhabitants, is the principal focus area of CONCERTO measures. 92 m² area of solar thermal systems for combined heating and Domestic Hot Water (DHW) for 20 single-family houses and 268 m² large-scale applications for multi-family houses, or communal baths, represents an increase in the use of energy from RES. This is complemented by 7 photovoltaic (PV) systems in private family houses (5 kWp each) and three large-scale PV systems (40, 200 and 470 kWp).

About twenty new residential buildings have been realized within the CONCERTO measures. A part of them is the “eco-village” consisting of “earth-sheltered” houses (Picture 1). A 24-appartment building of 2060 m² and a nursery school of 1000 m² have been retrofitted and at both a reduction of heat demand larger than 50% could be reached. Additionally two office buildings have been refurbished.

In the field of active solar energy use 19 small solar thermal systems with a total collector area of 101.5 m² and 2 large-scale units (60 m² flatbed, 228 m² ETC) were implemented. The system of 228 m² vacuum tubular collectors had been installed on the roof of the 50-m public swimming pool, complemented with heat pumps utilizing the waste heat from the ventilation system for warming-up the water in the pool. Nine small-scale PV systems with a total of 104.3 kWpeak and two large plants (201 and 466.6 kWpeak) have been installed (Picture 2).

Two basic energy sources are used for combined heat and power units (CHP) in combination with district heating systems (DHS) at Zlin: Landfill gas and gas from biodegradable waste. Within CONCERTO the efficiency of using landfill gas has been increased by monitoring and by extending extraction stations and two DHS have been optimized.

IRC (Individual Room Controller) systems have been implemented in five elementary and ten nursery schools in 2006 (Picture 3). The consumption of heating energy could be reduced by 30 % percent (equal to 2 GWh in total per year).

CHP with biogas and biomass

Two basic energy sources are used for CHP in combination with district heating networks (DHS) at Zlin: Landfill gas from the communal waste depot and gas from biodegradable waste.
Within CONCERTO the efficiency of using landfill gas has been increased by monitoring and by extending suction stations. In order to sell to the CHP plants only gas with optimum parameters, a system for daily monitoring of its parameters has been installed (Picture 4). Only gas with more than 40 % of methane and less than 2 % of oxygen is used by the CHP plant (Diagram 1).

Another CONCERTO action was to implement the separation of biodegradable wastes. That includes waste from households, schools and public building dining rooms, grass, leaves and woods brought from the city parks and forests as well as paper (up to 20 %). This waste is re-processed by aerobe fermentation (100 hours) into a certified (”energetic”) compost (Picture 5) to be combusted at the CHP plant in mixture with brown coal and the above-mentioned landfill gas. The production capacity is supposed to be 900 tons of compost per year with a calorific value of about 3.2 kWh/kg (2.88 GWh in total per year). 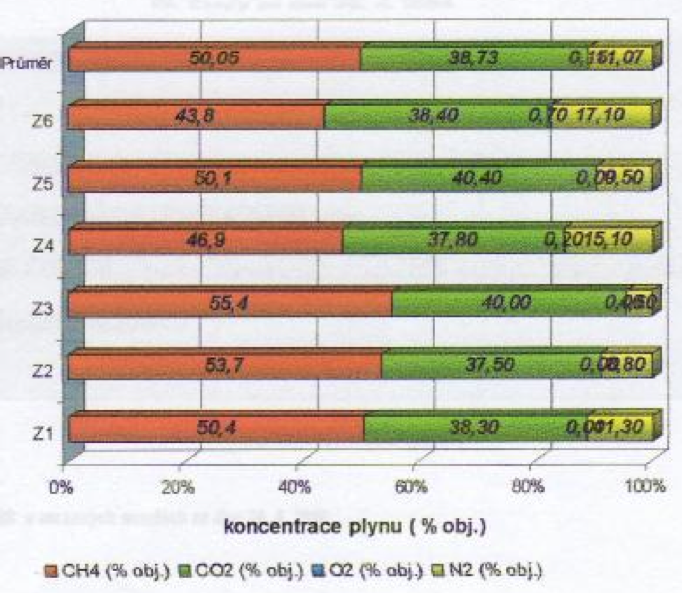 In summer 2006 individual room control systems were installed in 5 elementary and 10 nursery schools at Zlin. Investment costs at Podhori Elementary School (Picture 6) have been 62,600 Euros, total investment costs for all schools sum up to 520,000 Euros.

The temperature is automatically reduced from 21°C to 15°C during the night and weekends. This resulted in 30% less energy consumption. Savings of about 2 GWh per year correspond to a yearly CO2-reduction of about 850 tons.

Moreover, the heat comfort improved due to the possibility to set up the space heating in individual rooms depending on the current activity.

CONCERTO provided best practice examples that others could follow. After the implementation of the core projects, large percentages of people participated in related activities. They realized that the activities helped. The city of Zlin invested more money from their own budgets. Especially the refurbishments transformed their neighbourhood and people were pleased with the aesthetics.

Workshops and seminars were held in the city hall of Zlin for people who were interested in participating (private individuals and organizations). These were aimed at finding people wishing to be part of CONCERTO but also gave general information on refurbishments on houses, solar thermal etc.. Over 500 people could thus be reached. Also, the University of Zlin now offers courses for engineers on energy efficiency in buildings, energy efficiency in production etc. CONCERTO has probably played a role in bringing these about.

The CONCERTO-Sites and related projects attract a certain amount of visitors on educational trips (schools, universities), there were about 8000 visitors up to the end of 2012.

Three of Zlin’s project partners (all others apart from the City of Zlin) had to implement the project measures in the first reporting period without pre-financing, due to a very complicated and expensive system of providing bank guarantees in the Czech Republic. Therefore, the partners had to take on loans and mortgage in order to pre-finance the project by themselves. Despite the existing Czech Fund for Environment, there were minimum possibilities of co-financing, which was particularly critical for building projects (both new builds and retrofitting). There was no support from the state and very low support from Energy In Minds. That’s why people had a tendency to retrofit in several steps – e.g. one year they exchanged windows, the next year they insulated the façade, etc.. To gain these people as third parties, they were allowed to realize those measures within in a maximum of two subsequent reporting periods. The situation substantially improved in spring 2009 when the state programme “Green Lights for Energy Savings” was established. On the other hand there are many demonstration projects now, implemented within Energy In Minds which can serve as good practice examples for investors participating in the programme “Green Lights for Energy Savings”.

At the beginning it was not easy to find interested home owners for small scale solar thermal and PV systems and for retrofitting because residents were apprehensive about the procedures, which they expected to be complicated. Therefore, broad information campaigns and seminars for private home-owners were held. Energy awareness of people has increased a lot during the project.

The initial proposal was put together in 2004, when CZ became part of the EU. At that time there was much enthusiasm, big advantages were promised. But project started a year later after long negotiations/ changes and adaptations with the EC and enthusiasm had waned. Nevertheless the project team managed to keep people on board .

Energy checks were undertaken for all private, office and industry buildings in the demonstration area.

Small and large scale installations of solar thermal and photovoltaic systems have been the most innovative aspects of the project, as initially the level of renewable energies installations was very low. Such installations are highly visible to inhabitants and visitors of the CONCERTO demonstration area.

The fact that Energy In Minds provided demonstration projects of energy efficient new buildings and refurbishments as well as RES for private households led to replication amongst neighbors.

Public campaigns, education, training etc were organized. In Zlin, the information campaigns have been very successful, leading to increased energy awareness and motivating people to implement energy saving measures. An internet energy check gives people in Zlin the opportunity to get quick feedback about their energy consumption. During the whole duration of the Energy In Minds project, the dissemination activities were in the center of attention of Zlin’s project partners, particularly the City of Zlin. It was one of the possibilities to get over the serious “handicap” of the project – the restricted area for the investment activities.

The presence of general energy or climate plan or activities of local energy agencies and networking for local actions.

Thanks to CONCERTO funds and State resources, the CONCERTO project in Zlin can implement several activities, originally planned within the “Energy in Minds!” project only, within other programmes. Therefore the CONCERTO objectives of promoting and developing renewable energies can be spread on a larger scale.

CONCERTO as such was a success factor. At the end of the third reporting period it was supposed that all major investments would be completed by the end of 2008. However, in autumn and winter 2008 other big investors appeared wishing to enter the Energy In Minds project with large scale PV plants, further biogas activities and utilization of the waste heat for warming-up the water in the swimming-pool via heat pumps.

At the final stage of the project the “replication effect” occurred when two or three houses in a street were retrofitted and equipped with solar thermal systems and hence other people in the street decided to do the same. In cases where there was yet some budget left and if the investor could guarantee that the activity would be finished soon enough to allow at least one year monitoring of plants and at least one winter-season monitoring of buildings, they were included into Energy In Minds.

At the present time project partner GHA in cooperation with a Slovak partner prepares a project with the goal to present eco-friendly projects in the Zlin Region and the neighboring Trencin Region in Slovakia. It will be financed from the EU programme INTERREG. The main activity will be the promotion of RES and energy saving projects in the region and offer guided tours for school children, students and various other target groups, as well as to the general public. Zlin Louky will of course be one of the most important stops on those tours. About three times more new energy efficient buildings and refurbishments have happened than those done under CONCERTO, due to replication amongst neighbours.

The eco-village Jizni Chlum near Zlín consists of earth-sheltered houses. Their energy consumption is close to those of passive houses. 60 - 90% of the heat is provided from renewable sources. The building is covered with earth. Only the front façade is visible. The rear is built into the slope of a hill. This, together with good insulation, results in low heat losses through the building envelope.

A new technology was installed at Zlin’s central waste depot enabling the re-processing of biodegradable wastes into a certified combustible (”energic”) compost. This technology, together with the large-scale PV system of approximately 200 kWp located at the communal waste depot, will be used as a “demo-park” presenting utilization of various kinds of renewable energies.