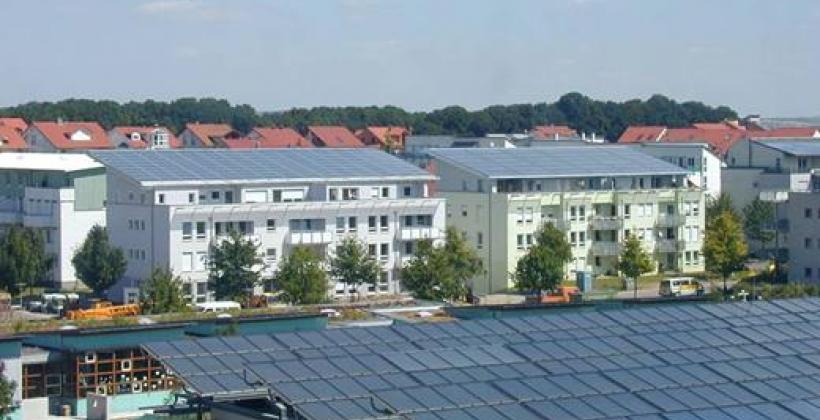 The city of Neckarsulm is a city in northern Baden-Württemberg and part of the district Heilbronn. It has an approximate population of around 27,000 inhabitants and is regarded as one of the cities with the highest density of solar thermal- and PV systems in Germany.

The information and demonstration actions of this community lead to 24% less conventional energy consumption in the CONCERTO core area of the city, which involves around 10,000 inhabitants. The city was awarded with the German "Solar award 1998" and with the "Environment award 1999". It has the world’s largest solar system with seasonal storage.

In total more than 14,000 m² of multi-family houses and public buildings have been retrofitted. For example the retrofit of “Neuberg school” (Picture 1) with an insulation standard 33% below the national regulation, the installation of a PV system and a pellet boiler (combined with a sterling engine) moved the primary energy demand almost down to zero. The city of Neckarsulm additionally constructed 6,000 m² of new buildings during “Energy in Minds!”. One large company building of 6,300 m² has been constructed according to CONCERTO standards.

During the 5 years of “Energy in Minds!” 182 photovoltaic systems (in total 1,430 kWpeak) were realized. The largest PV plant among them has a power of 380 kWpeak and was mounted on the roof of a company building. In total 119 solar thermal systems (with a total surface of 1,250 m²) have been installed: 850 m² by private house-owners and 400 m² by the ESCO “Stadtwerke Neckarsulm”. Several large pellet boilers (between 25 and 600 kW) have been implemented in public buildings.

With a solar sludge drying plant, the connection of an existing cogeneration plant to the municipal district-heating network and the integration of a heat pump into the district heating network at Amorbach (combined with a seasonal storage, Picture 2) innovative projects have been realized.

The solar sludge drying plant was finished in September 2009 (Picture 3). When it became clear that the central sewage treatment plant had to be retrofitted an innovative concept was worked out (Figure 1). Solar energy is used to dry out the sludge in a solar greenhouse to a water content of less than 25%. Thereby volume and weight of the sludge reduces to 70%. This dry "sludge" can be easily disposed or can be used as a bio-fuel in a nearby wood-chip central heating station. The economic potential by reducing transport and disposal costs is significant. The expected CO2 reductions are 7,000 t/a.

A new kind of co-generation plant with Organic-Rankine-Cycle (ORC) in Neckarsulm Trendpark (Picture 4) in combination with a 6 MW wood chips boiler serves as a central heating station (constructed before CONCERTO). Within CONCERTO the district heating net of the inner city and a swimming pool were connected to this central heating station (Figure 2). By increasing the heat load from originally about 7,000 MWh to about 22,000 MWh the operation of the plant became more efficient due to increased operation hours. 3,000 tons of CO2 will be saved per year. Monitoring results show that the measure was very successful.

An example for an efficient district-heating network is the quarter Amorbach. In the context of a Europe-wide pilot project in 1997, a “district heating island” supported by solar energy was established providing heat for heating and domestic hot water of about 900 households. Within this project about 6,000 m² of collector area have been connected to an underground duct store with a volume of 63,000 m³. The heat not needed in the summer months is stored in the ground.
As the goal to cover 50% of the annual heat demand by solar energy was not reached it was decided to optimize the system within Energy in Minds. Due to high return temperatures the solar gains were limited and the “heat removal” of the underground storage complicated. The solution was to integrate a heat pump with 500 kWtherm (Picture 5) to cool down the return temperature (Figure 3). Simulation showed that gross solar gains could be increased by 28% (Figure 4).
Monitoring results show that the efficiency of the storage has improved. The seasonal duct storage is cooled down to about 25°C (before 40°C). Increasing the operating hours of the heat pump can further optimize the system. Previous optimizations resulted in large effects showing the importance of detailed monitoring and analysis.

At the beginning there was the problem of persuading the relevant authorities and municipal bodies of the necessity of local CO2 reduction measures. Objection: lack of economic efficiency.

Lack of experience in developing and maintaining a specific technology, lack of training in the sector especially for installers. Therefore, training for caretakers and craftsmen was carried out by the Solar Energy Initiative.

The interest of owners of single-family houses in complete retrofits (high investment costs in comparison to low subsidies) was very low. Due to the low interest of private owners in energy saving modernization of their single-family house several multi-family houses (private owned and owned by the city) and two schools were retrofitted. Social barriers: The interest for small pellet boilers was very low. Compared with the investment costs for heating systems operated with oil or natural gas the costs for pellet boilers are higher of course. But on the other hand there are several subsidies given and fuel costs can be saved by lower pellet prices. It cannot be excluded that there was still a general skepticism among the population concerning pellet boilers. Another reason for the low interest might be the big choice of alternative heating systems. Success factors identified: Technical Success Factors: The frequency of energy checks performed on new buildings and the IR- thermographs for energy check.

Establishment of a local energy advice center. Establishment of the “Solar- & Energie Initiative Heilbronn”. This is a private organization financed mainly by the municipality of Neckarsulm and other stakeholders such as private companies, neighbor communities, etc.

The city of Neckarsulm developed a multi-faceted funding package, which, when combined-with CONCERTO funding had been the most effective policy instrument. The number of installed PV systems for private households surpassed the expectations of Concerto by more than double. The reason for the high interest in PV installations was the high reimbursement people got for feeding the produced electricity into the grid. At the same time high loans were given by the government.

Municipal utility companies (“Stadtwerke Neckarsulm”). With regard to the legal form, it is a self-operating ultility, not a GmbH.

Development of their own action plans by the observer cities (Gornji Grad/Slovenia and Turin/Italy) based on the experiences of „Energy in Minds“. The willingness to pass on the acquired knowledge as quickly as possible, led to the result that during the project period more observer cities participated in the project: Trier (Germany), Wieselburg (Austria), Värnamö (Sweden), Val Pellice and Provincia di Biella (Italy).

Energy checks in about 5-10% of all buildings in Neckarsulm make people more energy aware in the community.

The city of Neckarsulm also constructed a lot of new buildings during Energy in Minds. In total 11.000 m² were realized, the following RES technologies have been implemented: 1.200 m² solar thermal, 1.400 kWp PV and 1.100 kW biomass.

Solar energy and a floor heating system are used to dry out the sludge in a solar greenhouse to a water content of less than 35%. In doing so volume and weight of the sludge reduces by up to 70%. This dry „sludge“ can be easily disposed of or can be used as a bio-fuel in a nearby wood-chip central heating station.

1. In June 2007, the high efficient retrofit of the “Neubergschule” was finished. Besides retrofitting the building envelope a new heating system was installed consisting of two pellet boilers and a prototype Stirling engine. The primary energy is reduced by 75%. When taking the electricity production of the PV system and Stirling into consideration the school becomes a primary energy supplier (rather than consumer).

2. The solar sludge drying plant was finished in September 2009. When it became clear that the central sewage treatment plant had to be retrofitted an innovative concept was worked out. Solar energy is used to dry out the sludge in a solar greenhouse to a water content of less than 25%. In doing so volume and weight of the sludge reduces up to 70%. This dry "sludge" can be easily disposed or can be used as a bio-fuel in a nearby wood-chip central heating station. The economic potential by reducing transport and disposal cost is significant. The expected CO2 reductions are 7.000 t/a.

For further examples, like Amorbach, Trendpark, please visit the project website of Energy in Minds! under “News”.