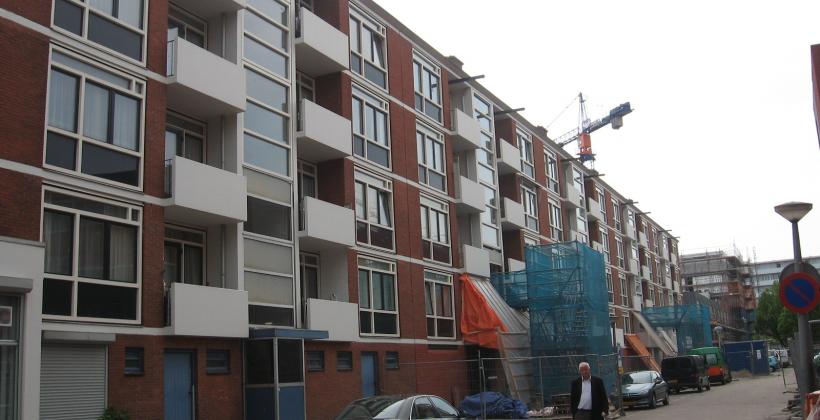 Amsterdam is known for its historic houses, but it also has many apartment buildings constructed in the 1960s. The CONCERTO project in Amsterdam is eco-refurbishing some of these more modern blocks in the Amsterdam New West neighbourhood.

A total of 300 1960s dwelling houses will be refurbished by the project, providing inspiration for 50,000 further dwellings that could be renewed in the same way.

Steps being taken include rigorous building shell improvement and insulation, upgrading of heating systems and the domestic hot water supply system, and replacing old windows with high performance new ones.

A second project is Complex 40, consisting of a series of social housing units. Improvements include installation of high efficiency windows with a 30% better insulation value than standard double glazed windows, attic and ground floor insulation as well as waste water heat recovery. PV panels have also been installed on the roof.

Meanwhile, the energy supply to the area is benefiting from a new biogas plant that will convert waste to energy.

Altogether around 460 dwellings from the 1960’s have been eco-refurbished within the CONCERTO initiative (Picture 1). Special emphasis had been on replacement of the windows, improving insulation of the building envelope and upgrading heating systems and domestic hot water supply. Furthermore, on top of the roof of one of the refurbished building complexes a 60 kWpeak solar PV system was installed.

The heat for the DHS is provided by residual waste heat from the regional waste incineration plant and biogas cogeneration from sewage treatment (Picture 2). The sewage treatment plant was part of the ECOSTILER project. Here sewage is converted to biogas (neighbored to the waste-to-energy plant). CHP units (combined heat and power) convert the biogas to electricity, heat and flue gas. The flue gas is innovatively used to optimize the incineration process in the waste-to-energy plant.

The AEB –biogas recovery plant (Figure 1) realized within CONCERTO will have a total energy efficiency of about 94%. This is achieved by combining CHP, Waste-to-Energy (WtE), and Waste Water Treatment (WWT). The biogas is produced in the adjacent WWT. 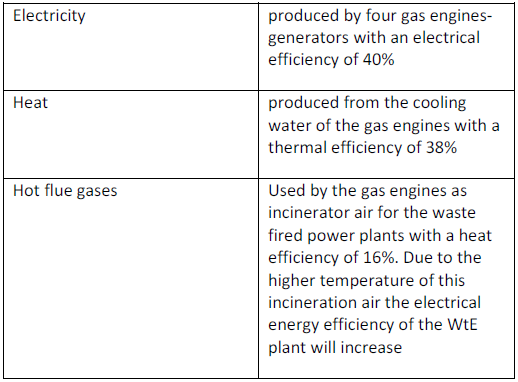 CONCERTO is seen as a model for all demonstration activities. The Leeuw van Vlaanderen residential building has won the Dutch Renovation building of the year award 2007.

RES in the waste-to-energy plant / biogas plant will increase their combined energy-efficiency rate up to 94%. Feeding present heat losses into a newly built district heating system can accomplish a 50% CO2 reduction in up to 50.000 dwellings.

It has been proven that with the right stakeholders involved emissions from 1950ies/ 60ies buildings can be reduced by 70% at reasonable cost.

Energy performance is part of building regulation but it focuses only on new building (which represent 1% of the entire market. The rest are old buildings dated 1960-70). Nothing is done for retrofitting – the focus is only on new buildings. Housing providers are not allowed to increase rent following energy efficiency improvements, even though tenants enjoy lower bills. They therefore cannot recover their costs.

Administrative barriers: The experiments of the exhaust gases in the waste incinerator in Amsterdam did not initially deliver as yet valuable results. Due to planning constraints, further experiments had to be delayed.

It is difficult to operate a reliable biogas plant that uses ‘dirty’ biogas from a sewage treatment plant.

Due to the financial crisis, housing associations, which traditionally had had sound financial standing, lost money though bad investments. Furthermore, the national government had put pressure on housing associations to reduce their cash reserves.
The envisaged business model of selling off the first few refurbished flats in order to finance further refurbishment did not work out, as the housing market had also come to a stand still. Furthermore, the legal barrier of housing providers not being allowed to increase rent following energy efficiency improvements. As a solution, one part of the project was able to sell 30% of flats and break even. The other part “complex 40” made a loss and will not be able to recover their investments, as they also cannot raise the rents.

Retrofitting work in dwellings in occupied state put large burdens on all tenants, especially with regard to nuisance and temporal absence of hot water facilities. The main conclusion of the stakeholder dialogue is that in house retrofitting a 70% CO2 reduction is possible at acceptable costs. This target can be accomplished by a technical package of optimal insulation, heat pumps or district heating and purchase of sustainable electricity.

The Use of PV electricity for common purposes runs smoothly.

Social Success factors: The CONCERTO project is seen as an incentive for all demonstration activities. The strong role and importance of stakeholder dialogues in urban renovation and the challenges for public participation needs also be stressed. Participatory Integrated Assessment (PIA) as a scientific method used in policy development for complex problems in which stakeholders are engaged. This dialogue is used strategically, embedded in policy process. This stakeholder dialogue helped to bring together the city district administrations, housing associations and citizen groups

A temporary organization called “Far West” has been set up, grouping the main social housing associations to take on the role of regenerating the area by 2015. As there are no requirements fixed at the municipal level related to a building’s energy performance, the presence of an association and its commitment has ensured the introduction of energy criteria in the regeneration activity and has facilitated communication with tenants.

Other: Amsterdam’s Integrated Energy Strategy for 2040: Its climate office is responsible for achieving the municipal targets and the Amsterdam Reduces CO2 agency are amongst the most effective measures supporting the CONCERTO project in Amsterdam.

There are much more flats (altogether 50 000 homes) now built exactly the way as those involved in ECOSTILER and these are now being refurbished in the same way. Furthermore, it is expected that in the next 10 years about 15,000 dwellings will be connected to this district heating system. Because the waste- to- energy/ biogas plants are located in the Amsterdam harbor area, no nuisance impacts on citizens are expected.

“Pro-West”, an NGO, tries to restart the refurbishment activities nationally (which have stalled due to the financial crisis) and uses lots of the results of the stakeholder dialogues from ECOSTILER.

Amsterdam will take part in the EC’s Smart Cities initiative. The participating site is the “Houthaven”.