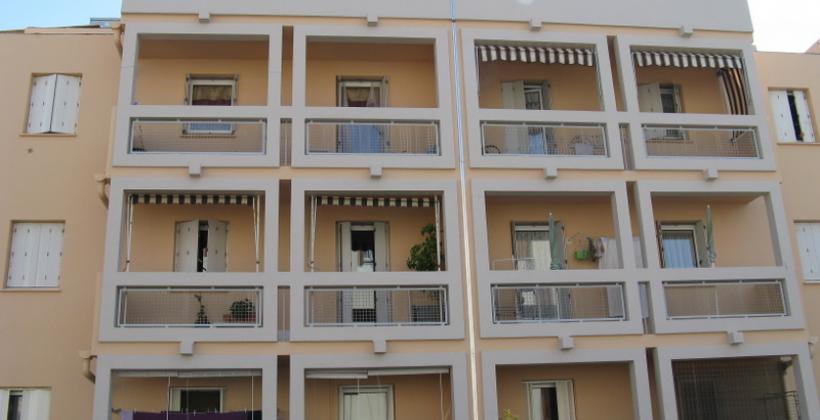 Many cities have urban fabric ripe for renewal. Ajaccio, the regional capital of Corsica, is no exception. Taking buildings from the 1960s and making them more energy efficient is one of the main challenges being tackled by this Concerto-Project. An added challenge is the renovation of buildings in Ajaccio's historic centre. Double-glazing with thermo-coating is being installed in fifty buildings in the protected city centre. These buildings are among 250 being re-glazed in this way.

An additional 565 apartments will be targeted for energy efficiency measures, and the CONCERTO project in Ajaccio is also constructing two High Environmental Quality new buildings, one with 15 apartments and one public service office building.

In total 419 apartments have been refurbished. Among these are two apartment buildings with 91 apartments at “Monte e Mare”. The measures included renovating the heating systems and installing solar collector systems (98 m²) for the generation of domestic hot water. At Saint Paul (Picture 1) a group of 52 more than twenty year old apartments were renovated by installing solar thermal collectors (94 m²), solar protection for the entrance area, roof insulation, double-glazing and improved mechanical ventilation. Further 196 apartments (4 buildings) at St Jean and 80 apartments (10 buildings) at Pietralba received insulation on the exterior walls and on the roofs. Furthermore, in the buildings of St Jean a CASA system (building control), new e-glazing and improved ventilation have been installed; on Pietralba 142 m² of solar thermal collectors were mounted.

At the historic center a new apartment building house with 8 apartments (602 m²) has been built according to high environmental quality standards (HQE).

For the refurbishment of 91 apartments at “Monte e Mare” monitoring data is available for heating (right bar “NEW” in Diagram 1). Compared to the national regulation (2nd bar) and the CONCERTO specification (3rd bar) a drastic reduction by the energy efficiency measure can be stated.

(Information and diagram taken from a crrescendo status report)

There was a lack of training in the sector (especially for installers) and a of training for architects for the environmental quality of buildings. Ademe organized an architect training course in Corsica. The first took place in 2010 and the second in 2012.  As a result, 20 professionals from the industry gained knowledge on environmental quality. The small size of most enterprises led to the issue that they could not miss the workable hours ‘lost’ on training. ADEME organized six sessions about thermal regulation information for enterprises (in the evening).

The CONCERTO projects were significantly delayed because communities only began receiving financial support from the ANRU (national funding that covered a high proportion of over-all refurbishment costs) in 2009.

In 2011, a call for tender was launched by ADEME on a regional level for architects to design an exemplar building with ambitious specifications. The winning architects conceived an ‘energy-positive’  building: It will produce more energy than it needs, because it is fitted with 200 m² of photovoltaic panels. A great but realistic design. This extremely high result for the public building would not have been possible without the European cooperation in the cRRescendo project.

The project received good benchmark and feedback for the regional energy observatory.

The highest priority has been given to urban renovation activity. In 2009, Ajaccio benefited from financial support for the Urban Renovation Programme (ANRU) in Cannes- Salines district. The (ANRU) support has been much more important from a financial point of view than the CONCERTO funding. However, the Urban Renovation Programme did not cover energy improvement measures. The CONCERTO program imposed measurement standards that endorsed the use of energy efficiency. The combination of these 2 incentives (ANRU-Concerto) has led to a positive mix in terms of standard and cost effectiveness.

In terms of replication initiatives deriving from the CONCERTO project, it can be claimed that the “Zero energy” public office buildings have been selected by ADEME agency in 2010 as demo-buildings. They became the first example of positive energy infrastructure in the Corse Region. The project has received additional incentives.
From a “Zero energy” public office building planned CONCERTO  a  so called “positive energy building”. It was the first demo-building in the region (with additional money from National agency ADEME).

The project introduced the production of more Eco buildings such as positive energy buildings and BBC (low consumption) buildings.

Ajaccio, the regional capital of Corsica and part of the cRRescendo project, is facing the challenges of renewing urban developments dating from the 1960’s, as well as renovating buildings in the historic centre.
The project is researching innovative methods to integrate solar water systems in the buildings in the centre of the capital.