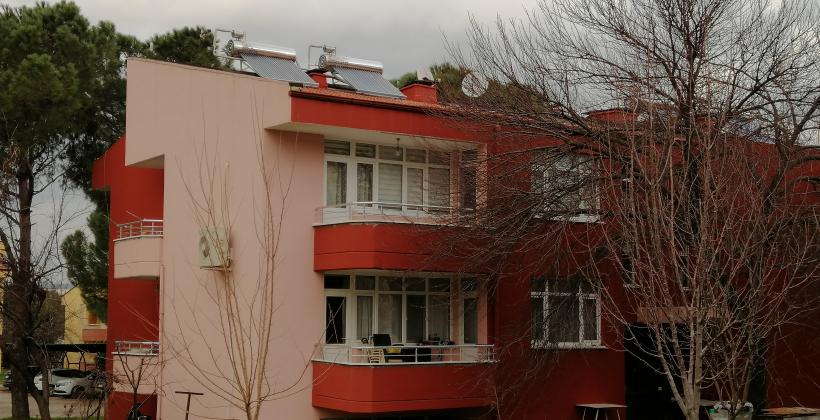 Soma (Turkey) has a population of about 90,000 people and can be found in the Manisa province, Western Turkey. The town has grown around the lignite mining industry and the lignite-fired thermal power plant in the city. The Soma demo site district comprises 7,037 m2 of conditioned area. Buildings were mainly heated by coal-based heating systems, where old-fashioned stoves heat the dwellings. The buildings were built in 1982 and the retrofitting took place between 2014 and 2018

After the one-year monitoring period (April 2018 to March 2019), CITyFiED achieved the following environmental and technical impacts in Soma demonstration site.

The key energy efficiency measures implemented in Soma are:

Retrofitting of the building envelope

The Soma demonstration site district included 82 buildings, with 79 residential buildings, 2 guest houses and 1 convention centre. The district counts with different typologies of construction including one, two and three storey buildings and duplex. The buildings were built in 1982 and present medium constructive quality in a progressive ageing. The buildings did not have any insulation layer on the wall, with very poor insulation on the roof, which resulted in significant thermal losses.

The renovation strategy for Soma demonstration site consisted of the application of passive measures such as the retrofitting of the building envelope in order to integrate insulation in the walls, roofs and windows. In addition, the replacement of the windows was planned for the convention centre: PVC framed double glazed windows with U-value of 1.2 W/m2K would have replaced the previous ones.

The retrofitting actions in Soma demonstration site were not finalized as initially planned; only a 20% of the buildings have been thermally insulated: 15 residential buildings, 1 guest house and 1 single lodging.

As part of the energy retrofitting project, the replacement of the lighting system was planned in order to reduce the electricity consumption and bill. A new LED lighting system should have been installed in the buildings. The electric systems and radiators have been retrofitted in 200 dwellings.

In order to reduce energy consumption and increase the share of renewable energy sources, the integration of active measures was proposed.

These interventions were the original retrofitting project for Soma demonstration site. Although most of the transmission line has been constructed, after the final decision of the demonstration site owner, the distribution line investment was cancelled.

The installation of solar collectors set the goal to reduce the energy consumption for the production of DHW supplied by the district heating. Solar collectors have been installed in all the buildings. The system includes 390 solar thermal collectors installed on the roof and faced to the South with a tilt angle to optimize solar energy gain.

PV integration on rooftops of the buildings was considered for the Soma district in order to reduce the electricity consumption. Unfortunately, the intervention was not implemented.

The management system provides data in order to maintain the best inside comfort conditions, to assess the reduction of the energy consumption and to increase the energy efficiency and the ratio of renewable energy.

The system originally planned should have monitored the whole district heating, i.e. the pump stations, building/district level electricity measurements, weather conditions and PV system measurements. Due to the amendment of the actions, it has been only possible to implement measures for the building/district level electricity and the weather conditions.

The Building Energy Management System was initially planned to include all the buildings of the district; however, due to the amendment, it has been only possible to monitor the buildings that were retrofitted. Indoor comfort quality parameters of each housing unit are monitored including indoor/outdoor temperature, humidity, light intensity, air flow and CO2 sensors.

The system has been installed in the pilot dwellings in order to measure and assess the energy consumption and indoor comfort quality.

The retrofitted dwellings and conditioned area are monitored to evaluate the energy performance and assess the environmental, social, economic and related ICT-measures impact. The implementation of monitoring platform and visualisation tools not only allow to collect data and store the information but also are creating awareness and verifying how people change their habits.

The utilization of waste heat from the thermal plant and the implementation of RTP pipelines in this Project would have enabled the testing of an innovative technology for future projects. Furthermore, working in a collaborative project together with different potential research companies enables to share the know-hows and develop new ideas for future projects. This has also been an important lesson learnt.

On the contrary, for the Turkish demo, the administrative processes seem to have been the most important barriers while developing the Project. The procedures are considerably slow and they need to be interrupted several times, what delayed the Project’s works. Due to this fact, the public investment was stopped and the consortium had to deal with this economic issue.

The most important achievement in this regard, was to assess high potential benefits of using the waste heat of industries such as the thermal plant of Soma, which help to decrease big amounts of CO2 emissions of the city balance. In the same way that in the other two demonstration sites, the energy efficiency measures were evaluated from a life cycle analysis perspective. Since the initial plan was to substitute the coal by waste heat, the environmental cost reduction estimated was even much higher than in the other demonstration sites that use other different renewable energy sources.

After the start of the CITyFiED project, the thermal power plant was privatized leaving demo site to the public institution Electricity Generation A.Ş. (EÜAŞ) and the authorization of the district heating system transferred from District Municipality to Metropolitan Municipality. Although the Municipality continued with the investments, the new owners’ final decision is to stop further investments.

This change in the legal framework drastically affected the financial mechanisms and moreover the business model of the Soma demonstration site, which made it not possible to finally accomplish the initial plan and ambitious targets.

Fortunately, projects aiming at increasing the energy efficiency and achieving environmental benefits are becoming quite a trend in Turkey. The government, through the Ministry of Energy, supports them by tax incentives, fee reductions and even being directly involved in many of these projects.

The tender process for publicly owned buildings is proved to be time-consuming and intricate. The local teams were on a tight schedule to complete the renovations on all the intended dwellings within the project’s duration.

A number of political and financial changes and events in Soma delayed the start of the works. One of the major risks for the project were not technical but administrative decision, as the government’s decision to privatise SOMA Electricity Generation & Trading Joint Stock Company (SEAŞ). This has influenced decision-making, prioritisation, budgeting and resource allocation for the company, which is at the centre of the interventions at the demo site and the related investments. In addition, these changes have led to new requirements for the buildings in the Soma demonstration site in terms of seismic testing.

The management of SEAŞ, who were involved in the proposal stage of the project, were very eager to accomplish the investments; however, there were a number of set-backs. Within the first year, some of the interventions on the buildings have been realised. After the privatisation, it took some time for the new management to take over the project. After the political events of 2016 in the country, the investments were on hold for a while. Unfortunately, the final decision of SEAŞ (EÜAŞ the new owner of the demo site) was not to do any investment without the seismic tests. The analysis (energy performance, LCC, LCA, etc.) done within the scope of CITyFiED have shown that the environmental and economic returns of the project would have been very positive if all planned intervention would have been realised. At least these studies have shown the potential of such interventions in the city as well as in the country.

Last but not least, the difficulty of behavioural change towards low energy use is a relevant barrier. Since the demo site is owned by public and the tenants would not have to pay for the interventions they were very much in favour of the interventions. They were aware their comfort level would increase with insulation and using cleaner source of energy instead of coal would have a positive impact on their health. It is a bit of a disappointment for some of the tenants that the interventions could not be done in all buildings, especially the district heating. Still they are curious about how they can monitor their consumptions and very interested in the smart phone application of the ICT partner, Reengen, in which they can check their consumptions as well as getting alerts for over consumption. At least some of the tenants seem to have increased their awareness since the start of the project.

Although the demo site is owned by public and the tenants would not have to pay for the interventions, social engagement activities based on communications and information were key to success in order to increase.

Thanks to this, tenants of the retrofitted buildings are very happy with the results and express their intention to see all the previously planned retrofitting to be finished.

Visualization tools are a very usefull tools to increase the awareness of the tenants that would eventually lead to behaviour change.

These are some of the lessons learnt during the project related to Soma demonstration site. More information about lessons learnt are reported in D5.9 in the Best Practice Book