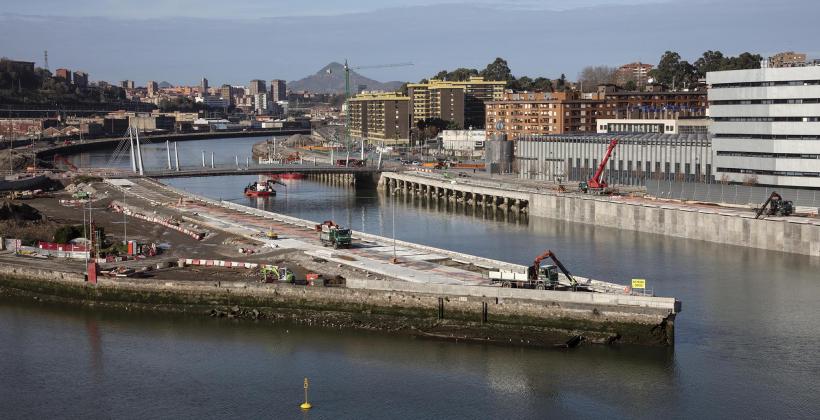 As part of ATELIER, Bilbao aims to replace its waste collection and cleaning vehicles with electric vehicles and to implement 3,500 electric vehicles in the city by 2020. Moreover, Bilbao plans to provide the municipality with a vehicle recharge infrastructure, as well as an online electric vehicle promotion platform.

The dedicated demo district of Bilbao will be Zorrotzaurre, an industrial area during the 20th century with lots of heavy industry coming from the Port of Bilbao that was originally part of the mainland and was transformed into a peninsula during the 1960’s to accommodate more space for docks. This peninsula has only recently in October 2018 become an island, a fact that has lowered the flooding risk of the northernmost part of the City of Bilbao as it prevents a bottleneck in the estuary.

According to Bilbao’s Strategy for Sustainable and Integrated Urban Development, Zorrotzaurre shall turn into a residential and business district where the deployment of new sustainable concepts, principles and solutions will be tested. The aim is to develop 5,500 new homes, 150,000 m2 of office spaces, 154,000 m2 of citizen spaces and 93,500 m2 of social and cultural facilities. The island will be accessible by zero-emissions vehicles only. The idea is to implement a zero emissions energy supply scheme and 100% electric public transportation. Amongst other implementations, interactive bus shelters will provide information on the energy flows, storage and local renewable generation, a seating area with weather protection, and many other functionalities for ctizens.

As part of ATELIER, Zorrotzaurre will be home to three Positive Energy Districts that will be connected via a geo-exchange loop, a system that will use geothermal and hydrothermal renewable energy to cover the thermal demand of the PED locations and to export the surplus to the rest of the island and, eventually, beyond. The core focus of the ATELIER demonstrations in Bilbao is thus the development of the geo-thermal system, an e-mobility hub, smart storage, local renewable energy production and the development of a smart grid and demand/response offers.