With five different workshops, all with the goal of bringing forward future project proposals, covering new innovative Smart City ideas, there was plenty of smart city discussion at the Marketplace Matchmaking taking place on April 27, 2021.

Watch the most exciting moments of the Matchmaking's five workshops here:

During the day participants had a chance to attend their preferred workshop(s) led by different Action Cluster or Initiatives — all of which had provided a draft-factsheet on their idea — to support the filling out of preliminary business model canvasses. The five topics were:

After the workshops, the proposals were pitched to judges from the European Covenant of Mayors, DNV and the City of Amsterdam with the ‘most mature proposal’ chosen to be on the topic of ‘Co-creation with local stakeholders using digital twins for integrated planning’.

The pitch of the proposal was presented to the judges by Pierre Major from AugmentCity and the effort behind it was collaborative between all Initiatives of the Action Cluster on Integrated Planning as well as with input from the participants in the workshop.

“I am very happy to announce that the project idea on Co-creation with local stakeholders using digital twins for integrated planning has been selected as the most mature project of the first Smart Cities Marketplace Matchmaking in 2021. The whole Marketplace Team congratulates for this collective effort of the Action Cluster Integrated Planning, its initiatives, the AugmentCity team and all involved.”

The most mature proposal won the chance to participate in a deep dive shape session organised by the Marketplace matchmaking experts as a step on the road to investment. (If you have a mature project idea, you can also submit it through the Smart Cities Marketplace Call for Proposals)

All the pitches from the Action Clusters received positive feedback from the judges, with some focusing on a large scale roll-out of a specific solution, while others discussed the potential benefits of the sophisticated technology smart cities are testing and adopting. A recording of the pitches and the accompanying factsheets on the topics will be published in the following weeks. To be sure not the miss it you can sign up for our newsletter. 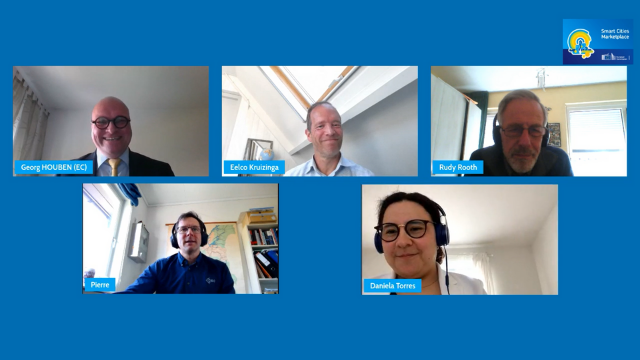