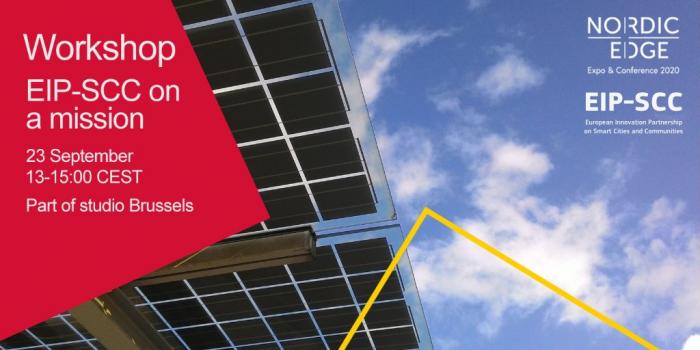 This year’s Nordic Edge Expo (NEE) and Exhibition took place completely digital. The conference as well as the interactive thematic workshops and digital exhibition were seamlessly tailored to attendees through a designated platform, which allowed participants, speakers and exhibitors to interact with each other either in the workshops or in the digital exhibitor zone. While the red thread of this year’s programme was “TRUST” and “Rethinking Normality”, topics such as Urban Energy, Places and Spaces, Green & Blue Mobility, Active Citizenship & Knowhow and Smart Health were addressed by the speakers and panellists.

The Smart Cities Marketplace team took part in the NEE with an online stand and a workshop titled "EIP-SCC on a Mission". Focus of the discussion was the challenge set by the Mission Board on Climate-Neutral and Smart Cities to create 100 climate neutral cities by 2030 as well as the role the smart city investment community and a Climate City Contract play in achieving this. The session was moderated by our Matchmaking Specialist of the Smart Cities Marketplace – at the time of the NEE still under the name of “Marketplace of the European Innovation Partnership on Smart Cities and Communities” (EIP-SCC) - Eelco Kruizinga.

The aim of this session was to triangulate the mission of becoming a climate neutral city, the idea to have R&D projects in place to help achieve this mission and the representation from the private investment community that could help aspiring cities in achieving this mission. During the panel session, high level speakers presented their reviews on the idea of the Smart and Climate-neutral City mission. The session was followed by a panel discussion amongst the speakers and the audience. After a short introduction to the Smart Cities Marketplace and how this initiative is anchored in the European Commission’s activities to support Smart Cities by Jens Bartholmes, Policy Officer at European Commission and DG Energy, Emmanuel Forest, Executive Vice-President of Bouygues group and member of the Mission Board for climate-neutral and smart cities took the floor. He explained the background of the Mission Board’s goal to create 100 climate neutral cities by 2030 and shared recommendations for cities on how to achieve their mission to become climate-neutral. He, furthermore, gave insight on the costs for the Mission Board’s ambitious goal and pointed out the importance of involving private investors in order to achieve the defined mission. The biggest funding gap is currently found in the renovation of buildings/ retrofitting. Emmanuel highlighted the Mission Board’s proposal of Climate City Contracts in tandem with a Lending & Blending Facility for ‘climate cities’ to address the financing challenge to achieve the mission.

Subsequently, Steven Fawkes, Director at EnergyPro, who led the Energy Efficiency Financial Institutions Group’s input into the Technical Expert Group on Sustainable Finance (TEG), gave an update on the European taxonomy in the framework of the EU’s Action Plan for Sustainable Finance and made remarks on how it affects cities, developers and vendors as well as financiers looking at smart city and climate neutral city projects. He furthermore pointed out the importance a common language between investors, issuers, project moderators and policy makers. As increasingly more capital will be made available for projects that align with the Taxonomy, cities, developers and project sponsors should feel encouraged to design projects that align with the taxonomy. The additional benefit is that Taxonomy-compatible projects will help investors with their disclosure obligations, thus building transparency. Consequently, smart city projects should be developed through the lens of taxonomy and impact investment to reach their goals.

Peter Radford, Investment Director at Amber Infrastructure, added his perspective to private investment in the Energy Sector – a sector that is increasingly winning the interest of the private sector - and described how the private and public sector can come together to support financing of Smart City and low-carbon-cities projects. Peter provided insight in the reasons why investors are looking to collaborate with cities and how such collaboration can be structured.

The session was concluded with two examples of Nordic cities on their mission to become climate-neutral.

Lisa Enarsson of the City of Stockholm, Sweden, and Project Manager in the European Smart City Project GrowSmarter introduced her city’s climate action plan in particular and the efforts of GrowSmarter in general for turning Stockholm into fossil-free and climate positive by 2040. The emissions from transportation remains the main challenge for Stockholm despite the fact that the number of people moving sustainably increases (the goal is 20% biking commuters, 77% of people already use public transportation when on their way to work). The challenge is the transportation of the people in their spare time.

Elina Wanne, Project Manager for Horizon 2020 project SPARCS in the project’s Lighthouse City Espoo, Finland, spoke of her city’s work to become a sustainable city – which it is since 2016 when it was named the most sustainable city in Europe. The experience of Elina Wanne demonstrates the following: In order to achieve defined goals, one has to figure out their strengths and what they want to become, to create their goals and to get support from political side, from people working for the city but also from the citizens (Community, Collaboration, Co-Creation). With this in mind, the city of Espoo as part of the project SPARCS focusses on creating sustainable, positive energy districts (PEDs), and cultivating e-mobility and new ways of citizen engagement.

Following the presentations of the speakers, the subsequent panel discussion provided insightful recommendations and hopeful results for the mission towards climate neutral, smart cities: